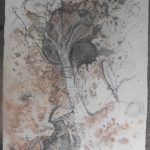 Artist and researcher Iain Biggs shares thoughts on the place of artists, and of creative ensemble practices, in a culture of possessive individualism that must urgently address its chronic failure of imagination in the face of eco-social crisis.

“Art is a parasite that feeds upon the corpus of culture. Its insularity is just a conceit….”
– Simon Read

One — driven to be part of the problem

The Great Below: A Journey Into Loss is Maddy Paxman’s account of facing the consequences of the death of her husband, the poet Michael Donaghy, from a brain haemorrhage at the age of fifty. She has worked as a counsellor in women’s health, a music teacher, musician and painter and currently teaches the Alexander Technique. She writes:

“Although I don’t think of myself as an artist, in that I am not ‘driven’, painting is a form of expression that seems necessary to me and I miss it when it’s not part of my life.”

This sentence, which comes towards the end of her account of her relationship with the husband she loved deeply, a man very clearly ‘driven’ to the exclusion of much that did not immediately concern his poetry, gives me pause for thought. In part because I recognise all-too-clearly the need to paint that she speaks of. In part because I think that, indirectly, her observation relates to the performance artist Andrea Fraser’s claim that artists are not part of the solution to our current socio-environmental crisis, as many assume, but part of the problem.

That sounds like a betrayal of both my own work and that of many people I deeply admire, at least until I think about the art world’s financial reality, its ‘big hitters’ — Jeff Koons, John Currin, Damian Hurst, Odd Nurdrum et al. What is the nature of the work such artists produce if not an expression of the culture of possessive individualism, the global economics the culture feeds and is fed by, and the deepening epistemological crisis in which current presuppositions about creativity are embedded? And that’s clear even before we link these things to an environmental situation that, in all probability, is now nearing its terrible endgame.

As it happens, Andrea Fraser is simply restating in variation concerns raised by the artist-turned-anthropologist A. David Napier, the liberation psychologist Mary Watkins, the writer, poet and art critic Thomas McEvilley and, most recently, the writer and academic Amitav Ghosh. Despite a lifetime spent making and teaching art, I find myself sharing their various concerns. So I want to raise two possibilities.

Firstly that, if we have a stake in the arts, we should now very seriously consider in what ways the arts, in the culture of possessive individualism, have and are enacting just the chronic failure of imagination that Ghosh calls the ‘Great Derangement’. Not as some kind of quasi-masochistic guilt-trip in the best Protestant tradition, but as a necessary step to re-orienting our notions of creativity.

Secondly, that we might ask ourselves whether the tendency to psychic monomania that Maddy Paxman describes as ‘driven-ness’ can be addressed by radically rethinking the nature of creative activity from a more inclusive perspective. Might it not be both more productive and more accurate to consider the attention and skills associated with arts practices, not as an end in themselves that justifies the artist as a ‘driven’ individual, but as catalysts or models for larger ensembles of heterogeneous skills, concerns and activities? Ensembles that would retain the psychic (if not necessarily the economic) benefits of a creative practice, but at some distance from the assumptions, expectations, and protocols central to the hyper-professionalised art world to which Andrea Frazer refers. Considering increasingly heterogeneous creative practices as compound ensembles might be a useful step towards reversing the situation in which art serves to perpetuate the culture of possessive individualism, and with it the Global North’s Great Derangement.

In the past I’ve used the term ‘mycelial’ to describe how the work of Christine Baeumler incorporates the roles and skills of citizen, neighbour, artist, university teacher, student of ecology, researcher, curator, mentor and, more recently, fortune-teller and student of shamanism. Maybe ‘ensemble practice’ is a better term, more able to consolidate the more inclusive understanding I’m reaching for. To stress an individual’s mycelial entanglement in multiple, interconnected tasks, connectivities and interdependences, all of which will, to a greater or lesser extent, involve creativity understood inclusively. If nothing else, the concept of ‘ensemble practices’ posits the parallel notion that individuals are themselves compound, multi-relational ensembles, supporting by extension a view of the artist that does not presuppose an exclusive hyper-individualism.

Four — between self and other

I think we now need to face the fact that the symbolic function of the artist in the culture of possessive individualism is to epitomise the notion of individual exceptionalism; to reinforce the presupposition that creativity is ‘owned’ by exceptional and self-contained individuals in ways that reinforce currently orthodox notions of personhood, nature and society. We are in reality, of course, constituted quite differently, in and through our connections, attachments and relationships. Consequently, I’m intrigued by the distinction Paul Heelas and Linda Woodhead make in proposing a spectrum of identity positions between a ‘life-as’ at one extreme and ‘being-as-becoming’ at the other.

‘Life-as’ requires massive investment in a monolithic psychosocial identity, one that must oppose or deny all values, connections, and relationships that do not reinforce its coherence. It lacks, that is, the basic capacity for empathetic imagination that enables us to negotiate the constant movement between self and other, to properly engage in and with the multiplicity of psychic, social and environmental realities in which we find ourselves. At the other end of their spectrum is a sense of selfhood as coexistent with the psychosocial and environmental multiverse — fluid, relationally contingent, mutable, open-ended.

The psychosocial and political stakes here are simple. To face our eco-social crisis, we must now find ways to attend to, sustain, and cherish as many ways of belonging in the multiverse as possible if we are to adapt to an unprecedented need to change. This cannot be done by investing in any ‘life-as’, including ‘life-as an Artist’.

Do we now need to differentiate ‘life-as an Artist’ from an involvement in making art that’s ultimately predicated on the understanding that the self cannot be reduced to a categorical identity? Isn’t this what’s implicit in Edward S. Casey’s distinction between a ‘position’ as a fixed postulate within a given culture and a sense of ‘place’ that, notwithstanding its nominally settled appearance, is experienced through living experimentally within a constantly shifting culture? If so, then isn’t what ‘places’ those who acknowledge the ensemble nature of practices itself predicated on negotiating multiple psychic, social and environmental connections, attachments, and relationships? On an open engagement with the productive tensions between experience and category, reality and representation, life and language?

Iain’s notes on ensemble practices relate to a book chapter he has recently submitted for the ecology section of an anthology, The Routledge Companion to Art in the Public Realm, which should be published later this year. “These are, as the title suggests, simply notes and lack the references, etc. which will appear in the final chapter when it sees the light of day.”

When working on these notes, Iain had in mind the work of two visual artists. Simon Read — who he quotes at the beginning — is an artist who fosters projects on a collaborative basis and who has immersed himself in environmental debates where collaboration on an interdisciplinary level is vital. Luci Gorell Barnes — who has herself recently joined ClimateCultures — is a visual artist whose participatory practice and responsive processes aim to help people think imaginatively with themselves and others. Iain and Luci have worked together on various projects, including a ‘deep mapping’ workshop that I took part in at art.earth’s Liquidscapes symposium in 2018. When I approached Luci, she generously agreed for me to use her images as an accompaniment to Iain’s text.

You can read more of Iain’s reflections on Amitav Ghosh’s The Great Derangement (2016, published by University of Chicago Press) on his blog.  In the book, Ghosh asks “Are we deranged?”, seeking to explain our imaginative failure to grasp — at the level of literature, history, and politics — the scale and violence of climate change.

Fellow ClimateCultures Member Cathy Fitzgerald uses the term ‘eco-social art’ for her own works, which she also describes as ensemble practices: “often involving art and non-art activities and many ways of knowing from art, ecophilosophy, science and traditional and local knowledge and practical experiential knowledge.”

An independent artist, teacher and researcher interested in place seen through the lens of Felix Guattari's ecosophy, working extensively on ‘deep mapping’, other projects and publications.
Read More