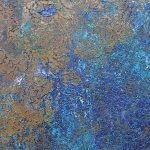 An artist, author and lecturer exploring the question of ecological relationships through themes of nature and animals, physicality and abstraction, with recent exhibitions on climate change.

Eva Strautmann was born in Strang, Bad Rothenfelde in 1963. After graduating from high school, she lived and worked in England (London and Manchester), where she began painting. Since then Eva has been involved in art and the media, on the street and in personal debates on the question of ecological relationships. Nature and animals, physicality and abstraction are her themes.

Eva initially worked as a tutor and later as an artistic assistant at the Berlin University of the Arts. This was followed by film work with Karola Schlegelmilch and writing: the story ‘Encounters with Isaak’ was published in 1999. After various scholarships in Budapest (City of Frankfurt) and Cesky Krumlov (Hessian Ministry for Science and Art), she now lives and works in Frankfurt with exhibitions at home and abroad, and works as a lecturer. A grant from the Hessische Kulturstiftung, Wiesbaden, followed in 2021.

“As an artist I have always been focused on nature, animals and ecological relationships between physicality and abstraction. In my works I am thinking about colours and, for example, arctic noises in creating an arctic blue, ‘Blue 1-4’. I was part of the ‘Climate Change Exhibition’ at Mid Wales Arts and am also taking part as a member of Harvard-Climate-Activity (HACE).”