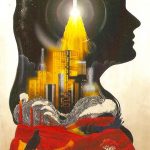 The same creative team who brought us the innovative Deep Time Walk app in 2017 has now released this beautifully illustrated pack of cards, laying out the timeline and the story of the development of the Earth and its life over our full 4.6 billion years. It’s a mini-encyclopedia and pocket guide to the origins and meaning of being human in our home world.

From Earth’s origins (4,600 million years ago) and Late Heavy Bombardment (4,100 MYA), through the arrival of the first RNA molecules (3,800 MYA) and life’s Last Universal Common Ancestor (3,700 MYA) to the oldest fossils (3,400 MYA), this is a story of great detail and complexity that the pack’s writers — Geoff Ainscow, Dr Stephan Harding and Robert Woodford — have done a remarkable job of condensing into captivating and compelling prose. A whole team of artists have produced images to complement a narrative that could at times overwhelm us with technical ideas — ‘horizontal gene transfer’ (2,600 MYA), ‘Ediacarans / Cambrian explosion’ (500 MYA), ‘energetic mitcochondria’ (1,800 MYA) — but which never holds up the story. Many of the cards also come with very short quotations from scientists, thinkers and artists:

“The sediments are a sort of epic poem of the earth. When we are wise enough, perhaps we will read in them all of past history.”

“The first law of ecology is that everything is connected to everything else.”

“The world is a communion of subjects, not a collection of objects.”

“People aren’t the apex species they think they are. Other creatures — bigger, smaller, slower, faster, older, younger, more powerful — call the shots, make the air, and eat sunlight. Without them, nothing.”

Each card covers 100 million years and, in around 150 words, does an admirable job of relating the known facts and the theories that give us our current understanding of where we’ve come from, just how far life on Earth has travelled in a succession of staggering biochemical novelties, biotic explosions and mass extinctions, and the humblingly brief span of time that is the story of our own species within this slow-fast-slow dance of the living planet.

The dawn of humans arrives 47 cards into the timeline — with the very next card bringing us to the present and into the Anthropocene. Breaking the steady pace of 100 million years per card to allow for this sudden explosion of various human species, the domination of Homo sapiens and our accelerating growth as a species and a world-shaping force, those last two cards in the sequence cover just 1 million years — “By about 500,000 years ago, early humans were making clothing to keep themselves warm, building shelters, creating fire and utilising hand axes.” If the card makers had stuck to the prehuman timescale of around 150 words per 100 million years, I reckon Homo sapiens — and the invention of words themselves — would have merited only the last syllable of the final word in the Anthropocene Epoch’s card: ‘extinction’.

The living present — a future on the cards

Fortunately, the story does not end there and the cards themselves continue, posing questions of our common future — ‘stabilised or hothouse Earth?’ — and offering suggestions for positive action and radical hope. The idea of these cards is itself an offering of action and hope in what it encapsulates as ‘the living present’: an opportunity to pause after the 4.6 billion year journey of the cards’ narrative and “take time to ground yourself again amidst the emotions that may be arising.” It’s an invitation to breathe with a renewed awareness of what the oxygen in your breath actually means in the long story of a living earth, what its exchange with carbon dioxide in your lungs means for our collective moment on Earth, and the work that your own particular community of microbes is doing with you here and now — inside the entity that you regard as ‘you’ — and your place in the community of beings now, as well as past and future:

“The influence of the deep past and the interdependence of the living present is all around you: it is your wider body, your greater self, our common home.”

Fittingly, then, the model for the cards — though complementary to the app itself, which is most likely to be experienced solo, whether on your favourite walk or in an encounter with some new place (either way, revealed as a localised but globally connected assemblage of soil, water, rock, sky and living beings) — is as a communal exploration, a conversation with others. You might share the pack with a friend or group as you walk together: perhaps taking turns to read out loud through the timeline; perhaps, stopping to consider some of the science and what it reveals in the living scene around you; maybe leafing through some of the illustrations and seeing what comes up in reflection on some of the questions you might share about the ecological and climate crises of our time.

The Living Present card poses a few ready questions to get just such a discussion started. “How do you feel about humanity’s place and impact on Earth now? … What strikes you about Earth’s long evolution?” My favourite question is probably “Has your sense of time shifted?”; whereas the ultimate challenge of “What can you do to help humanity shift towards a deep ecological consciousness?” is probably too daunting for most of us, even (or especially) after such an encounter with the immensity of Deep Time. It’s hard to feel at one and the same time the great immensity of the living planet over timescales vastly exceeding the brief flicker of our own existence, and to conjure the sense of the needed difference that one moment of thought in one lifetime among so many billion human lives can help to create. That is the paradox of our present times and of our personal time on Earth, however. And, as the cards neatly demonstrate, the resolution to the paradox and the key to avoiding a feeling of despair at the sheer scale of the challenge is that we are not alone. Immediately after posing that possibly overwhelming question, the card wisely advises: “For group work we recommend Joanna Macy’s The Work that Reconnects and the book written with Chris Johnstone, Active Hope.” These cards are stepping stones within a much larger landscape and offer us that necessary bridge to action.

Some of that action will be new thinking, questioning, conversation and further reading. Take the cards out again with a new group and see what emerges in your walk together through the woods, along the river, through the city park, beside the coast.

Some of it might be assembling with others — for street action, for political opposition, for culture-changing proposition. Take your appreciation of Deep Time into this present moment of crisis and opportunity.

Some of it might be working alone — creating stories, art, video, music or poems from your encounters with the cards and with the living world, putting the two into dialogue — and then coming together to share these artistic expressions in a public space, a private venue, a platform like ClimateCultures or a new site of your own creation.

Some of it might be devising and organising new walks with others in your communities, using these cards and your previous experiences with them or with the app as a means to simply share space and time and a little breathing room in the world.

Joining the Scientist and the Fool

As the introductory card explains, “We hope the pack empowers others to express Earth’s deep history in a multitude of forms, with the openness to imbue them with meaning to connect hearts and minds across different cultures and traditions.”

Whether you’ve already used the app or have yet to try it, I recommend you also (re)immerse yourself in the story told there by the Scientist and the Fool and introduce it to someone else. How might the two of you retell the journey? What questions arise, and who else might you find to explore them with? The app also works as an audio book for a sedentary journey, though travelling far with your own brain. And the script is now available as a short book. So there are many ways to explore Deep Time ideas and to bring them to life in your encounters with the world and with others. Many ways of thinking through and discovering your next step.

“What will you do with this one wild and precious life?”

The full field kit — app, audiobook CD, script and cards — is available at the Deep Time Walk site. And you can read the ClimateCultures review of the original app, Taking the World for a Walk; the app itself has been updated since then, with a range of new features described here.

Active Hope: How to Face the Mess We’re in Without Going Crazy by Chris Johnstone and Joanna Macy was published by New World Library in 2012.