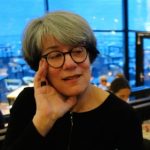 An art curator, educator and writer with a background in the environmental movement, who has created GroundWork Gallery to showcase art and campaign for the environment.

Following and to some extent alongside a degree in art history, my formative career was with the environment movement and for almost two years I ran the front office for Friends of the Earth – basically I was an administrator, but what I learned about campaigning has been of enormous value for the rest of my career. My first publication was the Friends of the Earth Cookbook published by Penguin (1980), now long out of print and out of date. Then I studied medieval art for a PhD. Years later my next book was Medieval Art, published by Oxford University Press (2001). In-between I worked as an art gallery curator and from 1990 mainly as an educator.

I was the founding head of education for the Sainsbury Centre, University of East Anglia until 2014. I had many years there, but also had periods as a freelance consultant and was on secondment to Tate from 2005-6 to manage the beginnings of their Visual Dialogues programme with their regional partner museums. The Sainsbury Centre has a world art collection and this gave me much opportunity to explore environmental issues as part of projects. One large outreach and research project has resulted in publication of my 3rd book: Cultures of the Countryside, Art, Museum, Heritage, Environment, Routledge 2018.

In 2016 I opened GroundWork Gallery in King’s Lynn, where my main aim is to demonstrate how , why and to what extent art and artists can help us think differently, deeply and afresh about the environment. There I campaign, as much as I show art. I also sell it, which has made me realise just how difficult it is for an art economy to thrive as part of ordinary daily life on the high street. For the future I hope that GroundWork can expand and involve many partnerships.

Veronica’s new book – Cultures of the Countryside: Art, Museum, Heritage, and Environment, 1970-2015 – provides a unique insight into the roles of the museum and heritage projects in rural and environmental issues in the recent past, whilst also offering perspectives and recommendations for the future. See more information here, including a 20% discount code for orders direct from the publishers.

A Personal History of the Anthropocene – Three Objects #6

15th January 2018
Curator Veronica Sekules shares three Anthropocene objects that mark the movement from a visionary symbol of eternity, to the hubris of a transitory age and on to a time which will be witnessed by what endures after us. Read More
Website
GroundWork Gallery
Instagram
@groundworkgallery
Twitter
@Groundworkkl