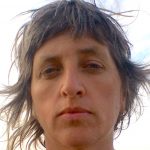 An ecopoet and a non-fiction writer who seeks deeper connections to nature and to bear witness to these Anthropocene times in a way that feels true.

I am a poet and writer living and working in Norwich, UK.

Increasingly I am calling myself an ecopoet. I’m also, by inclination, a poet of water — that’s the element I find myself returning to most often. My first collection, Billack’s Bones, was published by RIALTO in 2007; my second, Water Person Kit, was completed in 2016, and had themes around swimming in seas and rivers, shorelines and intertidal places, and the shifts that rising waters make to landscape. I’m currently working on my third collection, Her Whereabouts, which has twinned themes of my mother and the climate crisis. I am always trying to find deeper connections to nature, and drop into that consciousness, so I can try to bear witness to what is going on in these anthropocene times in a way that feels true. The writing feels urgent, but the overwhelming driver of it is love.

Translated by Reeds, my libretto for two East Anglian rivers, was performed in 2012. I wrote this with the nature writer Richard Mabey as mentor.

I was shortlisted for the Climate Change: Future Scenarios Commission in 2016 — the application for this made me really look closely at what it is I want to bring to the climate conversation.

I was selected for Aldeburgh Eight in 2014; commended in the Gingko Ecopoetry prize in 2017, etc. In terms of publications, I have been published in Poetry Review, The Rialto; Poetry Ireland Review, Magma (Climate Change issue), Butcher’s Dog, Under the Radar, Salzburg Review, Poetry News and, for non-fiction, The Guardian.

I won joint 4th prize and also had a second poem commended in the Gingko Ecopoetry prize 2019, which was exciting, as it made me feel like I am contributing to the increasing body of work that is culturally needed if we are all to try and make a little sense of this time.

I have written a book called Hurricane Season, which is a non-fiction meditation on the Florida Keys, and its environmental vulnerability. (it is basically a North American settlement on limestone outcrops, alongside the longest coral reef chain in the continental US). It is an extraordinary place, which I love — the manuscript won a prize, as a work in progress, and I was awarded two grants to go back and research the area and complete the book. I haven’t found a home for it yet but I would be so happy if I could get some of it out there.

I’m involved in Poets for the Planet and Extinction Rebellion, and have followed Climate Cultures for a while.

I’m always looking for East Anglia-based writers and artists to link up with. We feel climate change pretty viscerally here.