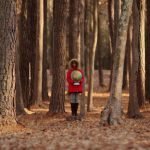 Environmental researcher Matt Law reviews an online performance about climate conversations: an interactive journey inviting us to consider how different connections and storytelling could have led to a different world today, and help save the world for tomorrow.

Are there pivotal moments where, if only somebody had said something different, the progress of the Bulletin of Atomic Scientists’ Doomsday Clock could have been slowed? What if you could be transported to one of those moments? What choices would you make? Would you know what to say? In a talk to TEDWomen in 2018, US-based Canadian climate scientist Katherine Hayhoe tells us that the most important action we can take on climate change is to talk about it, not by bludgeoning people with depressing facts, but by connecting the risk to your audience’s core values. Tassos Stevens and Michelle McMahon’s How We Save The World, commissioned from Coney by the Natural Environment Research Council (NERC), explores the ways our conversations about climate change can shape our futures, by putting decisions in the hands of the audience.

We are time travellers, guided on an interactive 75-minute journey by our reassuring and informative pilots (Naomi Stafford and Richard Popple, who also represent all of the characters we meet on our journey and are a joy to watch) to choose from a selection of places and times where we could make meaningful interventions. At a house party in Clapton in 2009, can we plant the seed of an idea about consumerism and plastic waste in the mind of young Fergus, playing in the kitchen with his Hot Wheels; or reassure Lucy, drinking gin on the balcony, who has abandoned her vegan lifestyle, having become jaded with the complexities and enormity of the sustainability choices we face?

Before audience members are called on to talk to the characters we meet, a disembodied voice, the voice of NERC-supported research, tells us about some of the psychology that impacts our choices — the rewards of consumerism, our reluctance to speak up out of fear of being judged; or the physical science of climate change, such as the influence of atmospheric carbon dioxide on clear air turbulence, and importance of forests for diversity.

How to save the world

Interventions having been successfully made by audience members at Clapton, we are presented with further choices of times and places to visit. Can we suggest a more successful term than ‘global warming’ at a focus group in Dallas in 1989 (the winning suggestion from our cohort was ‘Bonfire of the World’), or convince the daughter of a wealthy industrialist in early nineteenth-century Bingley of the dangerous path those profitable factories and fossil fuels are leading us down? The crunch choice comes in South Sumatra, in 2005, where we — now assuming the role of islanders of differing financial circumstances — are split into break-out rooms to discuss the choice between allowing PalmOilCo use of our forest, with an immediate monetary benefit, or to allow EuroNGO to protect the forest, giving us less of a financial reward, paid less immediately. Do we lift our families out of poverty now, or listen to the person from half a world away telling us what is best for the planet?

Placing the audience in control of the decisions, making a game out of climate conversations, forces us to think with empathy and care about the interests of the characters we are talking to. What angle can we use to help them see that the consequences of climate change will be to their detriment too? And how confident are we that we can do that on the spot in front of an audience of strangers? Drawing from research in environmental psychology, How We Save The World distils the idea that storytelling and human connections are among the most powerful tools in climate action at its most immediate and intimate level: the way we talk to each other about the part we can play in climate action.

Matt Law was one of five ClimateCultures members who took part in recent conversations with fellow member Julia Marques for her series Directing the Change, which Julia discussed in her recent ClimateCultures post, Conversations with Work That Connects. In his interview — which you can see in full as well as an excerpt in Julia’s post — Matt discusses how he is crossing disciplinary borders within Bath Spa University and has co-created a piece of theatre with the drama department there: The Last Hurrah (and the Long Haul) is a piece very much focussed on the community level of climate change and how incremental changes can unravel but also eventually strengthen a tightly-knit group.

You might also like to read a previous post by Julia, where she explores theatre as a space for thought about our options and what climate change means for us individually.

How We Save The World is a story game by interactive theatre-makers Coney. Written by Tassos Stevens and Michelle McMahon’s, it was created in collaboration with environmental scientists and the Natural Environment Research Council (NERC). It was first presented in 2018 at The Natural History Museum in London, and then re-imagined for our new global context as a live online performance, on Saturday 20th February 2021. “By looking at how we got to where we are today, together we’ll explore moments where small actions might create a ripple of change in the world – and learn how to take that forward in our own lives.”

You can read an interview with Michelle McMahon here. Coney will be announcing new performances of How We Save The World in the next couple of weeks — do check their blog for news.

The Bulletin of Atomic Scientists is an independent, nonprofit organization that gathers a diverse array of informed and influential voices tracking man-made threats and brings their innovative thinking to a global audience. The Bulletin focuses on three main areas: nuclear risk, climate change, and disruptive technologies. What connects these topics is a driving belief that because humans created them, we can control them. The Doomsday Clock is a design that warns the public about how close we are to destroying our world with dangerous technologies of our own making. It is a metaphor, a reminder of the perils we must address if we are to survive on the planet. When the Doomsday Clock was created in 1947, the greatest danger to humanity came from nuclear weapons, in particular from the prospect that the United States and the Soviet Union were headed for a nuclear arms race. The Bulletin considered possible catastrophic disruptions from climate change in its hand-setting deliberations for the first time in 2007.

Katherine Hayhoe is an atmospheric scientist and professor of political science at Texas Tech University, where she is director of the Climate Science Center. You can join the 3.8 million people who have watched her TEDWomen 2018 talk The most important thing you can do to fight climate change: talk about it — and then talk about it.