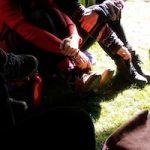 Writer Mark Goldthorpe joined the gathering for The Night Breathes Us In, part of Reading’s year-long Festival of the Dark, and found three simple, unexpected ways that the ‘outside’ – human, more-than-human, solar – came inside the tent.

Saturday 25th March – almost on the Spring Equinox – was the perfect day to be in Reading for the latest instalment of its year-long Festival of the Dark. Blossoms and blue skies and a temperature to match, with a good crowd making use of Forbury Gardens just off the town centre. I’ve never discovered this Reading park before. I’m glad I’ve done so.

It was also my first Dark Mountain experience, although I’ve often explored the digital foothills at their site. Their approach to the complexities of climate change and our uncontrolled planetary experiment has intrigued me, and continues to as I feel myself circling closer into its nuances. The name of the event, The Night Breathes Us in, captures this beautifully, expanding our focus to the more-than-human and its agency over us (even while we disrupt it) but acknowledging the unavoidable centrality of our selves within our own experience.

Sadly, in my case, the night only partially inhaled; I was able to stay for the afternoon but missed out on the evening. So, this is an invitation to someone else to post a blog on the second half!

The black marquee in the middle of the gardens was an intimate space to share stories and experiences under the guidance of Dark Mountain explorers, and the three sessions I took part in there brought quiet reflections and gentle conversations.

We began with the launch of Dark Mountain’s new book, with readings from the poems and essays in Uncivilised Poetics, and music and natural sounds from the book’s companion CD. Writer and editor Nick Hunt suggested poetics as a needed counterweight to the dominant language and statistics of technical and policy narratives. Poetics – not just poems, but art as exploration and an open-ended questioning – helps engage us in a world that cannot be captured in the beguiling, make-safe terminologies of ‘management’. Nick quoted from William Stafford’s poem, A Ritual to Read Each Other: “For it is important for awake people to be awake … the darkness around us is deep.”

Everyday language can trick us into unseeing important truths, and even our attempts to see a bit wider can still fence us inside our illusions. One of the passages shared in our dark tent in the middle of a city park was from Robert Bringhurst’s essay The Persistence of Poetry and the Destruction of the World:

This demented quality to a lot of what we tell ourselves about ‘the world’ and ‘ourselves’ is what Dark Mountain, the Festival of the Dark and others are countering. Poetics is part of what can help us overcome this strange collective lack of traction on the depths and connectedness of the world. Bringhurst also quotes Skaay, a Haida poet from America’s north west indigenous cultures, who refers to humans as xhaaydla xitiit ghidaay: “plain, ordinary surface birds.”

“Creatures with more power – killer whales, loons, grebes, sea lions, seals – know how to dive. They pierce the surface, the xhaaydla it is called in Haida.” – Robert Bringhurst

Poetics is one way for us plain, ordinary surface birds to pierce the flatness of our worldviews.

Art editor and writer Charlotte du Cann guided us in Crossing the Bridge, an exploration of the traditional solar and growing cycles of the year: the solstices and equinoxes, and the seasons of fertility, growth, fruitfulness and latency that they help to parcel out. These are transitions from which we are easily distanced but never truly separated. We need to know how we are creatures in and of time: a deeper one than is surfaced in our phones or clocks. Deep time is not just in the rocks and soils. It’s built into our substance: bones, tissues and cells, and in the bacterial cohabitants inside us. Everything that makes us ‘us’. It’s inside the shallow time of our daily preoccupations, even as these try to hide it from us.

Using stones that the group had brought in pockets or memories – stones from beaches, flint soils and rivers, from ancient glacier beds or the mysterious recesses of ebay – we toured the eight solar and soilar doors of the yearly cycle. We explored the associations, memories and feelings through whatever door we found ourselves placed at on our stone clock. What do the light of summer or the dark of winter do with us, within our minds and bodies?

And we talked about the stones we’d brought to share. I found memories of the shingle of Orford Ness in Suffolk, and how on one scale – the beach itself – it reveals the seeming fragility of places and lives on the edge, constantly subject to the waves and currents eroding matter here, depositing it there. On another scale – the individual pebble – shingle reveals the persistence of matter as it’s shaped and smoothed and swept onwards. Beach and pebble contain deep time in cycles that “it is important for awake people to be awake” to. Sharing a pocketful of stones brought a beach of stories into the tent.

My afternoon inside the black tent closed with theatre maker and author Lucy Neal guiding us through Holding the Fire. She shared inspiration from three key character for her: women from history, personal experience and mythology.

Lucia of Syracuse, a Sicilian Christian of the Third Century, used a wooden headtorch to show her a path through the darkness as she took food and comfort to the poor. And Lucy demonstrated her own candle headdress to great effect.

Lucy met Hildegard Kurt at a workshop in Slovenia. Hildegard used moments of quiet reflection and exchange to reveal: how we hold knowledge and creativity inside ourselves; that this can help us recognise our active part and potential within the flux of environmental crises; a shared space can enable us to explore a different possibility.

Hestia, daughter of the Titans Cronus and Rhea, was the ancient Greek Goddess of the Hearth. Her role emphasises the importance of the fire in domestic and public life; Homer’s hymn to her acknowledges that “Without you, mortals hold no banquet.”

With these examples in mind – of the hearth, shared space and light in the dark – we spoke in pairs, sharing stories of times and experiences of seeing and being seen differently and of awakeness.

Taken together, it was a lot of time to spend in the half-dark tent, but refreshing. And the ‘outside world’ was never absent. Early on, for about 30 minutes, a ladybird crawled over my left hand. It paused occasionally as it struggled to stretch the wings from under its red enamelled carapace, testing if they were ready. Eventually, it managed to unstick itself and take off. Later, speeding police sirens tore across our quiet voices inside, momentarily taking our minds back outside. Everyday life was proceeding all around us. Later, when I looked at the photos I’d taken inside the twilight, I saw how the automatic exposure had kept the camera’s aperture open long enough to paint the black fabric walls almost transparent, the unseen sun revealing a shadowy world beyond the veil. Three simple ways that the ‘outside’ – human, more-than-human, solar – had pierced the surface for the xhaaydla xitiit ghidaay.

Dark Mountain Project – published Uncivilisation: The Dark Mountain Manifesto (“Think of it as a flag raised so that we can find one another. A point of departure, rather than a party line. An invitation to a larger conversation that continues to take us down unexpected paths”) in 2009, and has produced many events and 10 volumes of fiction, poetry, non-fiction and images since then.

Nick Hunt – part of Dark Mountain’s editorial team, Nick is a writer of non-fiction and fiction (including the short story Green Bang, which was one of the commissions from TippingPoint’s Weatherfronts programme). His second book, Where the Wild Winds Are is his account of walking the invisible pathways of four of Europe’s named winds – the Helm, the Bora, the Foehn and the Mistral – to discover how they affect landscapes, peoples and cultures. You can read a series of exclusive excerpts for ClimateCultures, starting here.

Charlotte du Cann – also part of Dark Mountain’s editorial team, Charlotte writes about mythology, metaphysics and cultural change and teaches collaborative writing. She is the author of 52 Flowers That Shook My World: A Radical Return to Earth.

Lucy Neal – theatre maker, writer and community activist, Lucy is interested in the role the arts play to nurture and provoke the changes needed to transition our society to a more ecological age. She is the author of Playing for Time: Making Art as if the World Mattered.