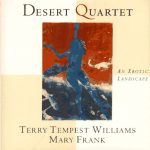 My partner Lucy is a child of the desert — indeed, we met in the Negev eleven years ago on a tour of Nabatean ruins (but that’s another story), and she’s recently returned from a top-up desert visit. Lucy has put me on to an extraordinary collection of writings and drawings: Desert Quartet – an Erotic Landscape, by Terry Tempest Williams and artist Mary Frank. A noted American nature writer, Williams — invoking the sensual lure and drama of the Colorado Plateau — dares to explore “what it might mean to make love to the land”. I’ve not been to the Colorado Desert, but reading this book took me back to the Joshua Tree, the Gobi, the Negev, and my waking dreams of the Sahara…

Desert Quartet is a short, beautifully illustrated hardback book, and probably quite rare: the sort of gem we stumble upon in a second-hand bookstore. Through it, we are taken on a wild journey of erotics — a quartet of them, in fact, connecting with earth, water, fire, and air. Terry Tempest Williams writes in a spare and intense word-by-word engagement with these elements, the place, space, and sensory feeling, and with herself: identifying, touching, and loving landscape and all within it.

It’s a book to read with a lover, or to take alone on a desert hike. If you are in the UK, Dungeness in Kent is our nearest thing to a desert — although not classified as such by the Met Office. It’s certainly a wonderfully wild place, and worth visiting to see the cottage and garden created by visionary artist and filmmaker Derek Jarman. If you’ve not been, do go. This book would be a useful companion: a wild guide to rewilding your soul and yourself.

Rewilding is an opening up: allowing growth, listening and looking deeply — getting to the depths of the soil and loam. As Williams writes, “The wind becomes a wail, a proper lament for all that is hidden. Inhale. Exhale. This is the dreamtime of the desert, the beginning of poetry.” Rewilding is us as humans seeking genuine and open authenticity — and then connecting that with the outer wild!

Desert life is raw, tough, not for the fool-hardy. I identify with the bunch of British travellers and writers who have gone out and lived in, crossed, or tasted in some way the deserts of our world. T.E. Lawrence, famously, ‘became’ a desert dweller, deeply identifying with desert life and its peoples, and then was ultimately caught up in the military wargaming of the First World War (and came back to try to instil the desert culture within himself as a mystic hermit in the New Forest). Wilfred Thesiger crossed the ‘Empty Quarter’. And, most recently, Rory Stewart openly identifies with both these figures and this has shaped his ends politically. Deserts do have an extraordinary impact upon the human psyche, however we taste them, and it is not to be taken lightly. So Desert Quartet is in many ways a primer to know how to take both our psyche and our physicality into such a harsh environment.

My desert time has taken me to the Gobi in Mongolia, the Negev in Israel, and the Mohave in California, and still I crave more. The Gobi opened my eyes to the truly vast — the endless savanna and the liminal changes across a space: from the snowy high tops of the Altai mountain range, to the coarse sand and temperate climes of the middle regions. The Negev seems harsher: it is a six-month no-go region if you can’t stand relentless heat. In both these deserts I was drawn in by the peoples — by the nomads of Mongolia and by the Bedouin of the Negev, also nomadic but now politically forced to settle by political structures and states. It is crucial not to get sucked into romantic notions of indigeneity amongst surviving nomadic peoples: yes, their lineage is long and deep, and there is great wisdom, but there is the harsh reality of everyday life. Such groups can survive and sometimes thrive, but it is against the ever-creeping modernity of capitalism and catastrophic environmental damage: mining and river pollution in Mongolia, and military exclusions, creeping cities, and extremist land laws in Israel are examples that come instantly to my mind.

No ancient, passed-on knowledge equipped nomadic peoples in our current age to deal with the insipid hostility of modernity: theirs is a hard-edged living in present-day reality, wondering how their children will cope with feet in both camps. Most Bedouin and Mongol nomads I’ve met would laugh at the notion of us sensation-seeking Westerners going out to desert spaces to connect with land, to connect with the ‘erotics of nature’, and ultimately with ourselves. For desert-dwellers, this world is already within. Just as many nomads are forced — by the capitalist economy, by bitter harsh weather and changing climatic conditions, or by political threats or force — to move to the cities, imagine if the situation were reversed and we had to flee our urban territories…  Like the wandering Mormons off to the brave new lands, we might find our call to desert lands before those external forces might prevail upon us.

My 2012 film Steadfast is an exploration of Bedouin life in the Negev, looking at the pressures these tribal peoples face, and how their interaction with the ‘new world’ cuts many ways.

At Extinction Rebellion Rewilding (gathering on Facebook as the ‘rewilding’ wing of Extinction Rebellion), we have recommended an exercise explored in Mick Collin’s book The Visionary Spirit, of identifying yourself with a tree as a form of life-review and engagement with presence: imagining ‘your’ tree, feeling your roots, trunk and branches — anchored, flexible and spreading out — and noticing your sense of flourishing, connection and resilience. In a similar way, I recommend using Desert Quartet as a total mind/body guide to engagement with place. It maybe offers an opportunity to reflect upon place/self, the wild edges between these, and (if you choose, within a Buddhist dialectic) no self; and an example of how we might want to reflect and record that through words, art, and more.

I’m just starting on another Terry Tempest Williams book, Red: Passion and Patience in the Desert, which switches into the politics of land use and land rights in American deserts: after the sensual, deep inner wild, out now into the boxing ring of human ecological scenarios and ego and squalling…

Desert Quartet – an Erotic Landscape, by Terry Tempest Williams and Mary Frank, was published by Pantheon Books, New York (1995). You can read an extract here, and in a piece for High Country News on 3rd June 1991, Williams says “Let us get out and love the land. Let us be intimate. The most radical act we can commit is to live well. There is no defence against an open heart and a supple body in dialogue with wildness. Internal strength is an absorption of the external landscape. We are informed by beauty, raw and sensual. Through an Erotics of Place our sensitivity becomes our sensibility.” (Yellowstone: the Erotics of Place, High Country News, 3rd June 1991, page 16).

You can explore Dungeness, situated next to Romney Marsh in Kent and one of the largest expanses of shingle in Europe, at Unusual Places. And there is more to discover at Romney Marsh – the Fifth Continent. “It has been said that Dungeness is like Marmite, you either love it or hate it. The landscape certainly divides people – a broad, echoing flatness with the nuclear power stations on one side, the shingle dipping into the sea on the other and railway carriages turned into quaint and strange looking dwellings. The stark wild beauty and distinctive character of this shingle desert engenders feelings of awe, wonder and curiosity.”

The Visionary Spirit: Awakening to the Imaginal Realm in the Transformocene Age by Mick Collins is published by Permanent Publications, UK (2018). Mick talks about his previous book, The Unselfish Spirit, in this 2014 podcast and you can watch his recent talk at the Into The Wild Festival, Summer 2019, introduced by James.

Extinction Rebellion Rewilding is the Facebook group exploring how rewilding can also be seen as not only the regeneration of natural biodiversity but also as the respect and rediscovery of indigeny and balanced relationship within the diverse ecosystems of the earth. “All acts of rewilding are Rebellion.”

You can watch James’ film Steadfast, and more of his films, on Vimeo. And don’t forget to check out Finding Blake, the website for James’ most recent film project, reimagining William Blake for the 21st Century. In one of his previous ClimateCultures posts, “Summon the bravery!” Encounters at Small Earth, James describes taking part in the Small Earth conference in 2018, where psychotherapists, ecologists, economists, philosophical and spiritual thinkers gathered to address hope for future living within the ecosphere.