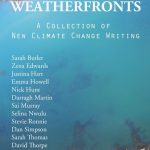 David Thorpe — one of the short story writers, poets and non-fiction writers commissioned from two Weatherfronts climate change conferences — explores the thinking that went into his story, included in the free anthology of the winning pieces.

I have a story, ‘For The Greater Good’, in the new collection, Weatherfronts. Here is a tracing of my thought processes that led to me writing it.

Originating with Thomas More’s 1516 book Utopia, the eponymous word literally means “no-place”, or any non-existent society ‘described in considerable detail’… as in his book. But over time it has come to mean an ideal sort of society in which everyone has what they need and there is peace and justice for all. Perhaps everyone has their own idea of what utopia would be like.

Its opposite is dystopia, a term coined 352 years later in 1868 by the philosopher J.S. Mill, who used it to denounce the then government’s Irish land policy. Dystopian fictions became popular in the 20th century. Dystopian movies now seem to dominate our screens, all graphically and dramatically prophesying a dire future.

I fear that there is a danger that by populating our imaginations with pictures of a future of suffering by the masses, environmental despoliation, endless conflict and/or the dominance of machines, as in films like Metropolis and Blade Runner and novels like Nineteen Eighty-Four then we could end up creating the very world that we fear. In other words that these prophecies become self-fulfilling.

By contrast, what are the features of utopia? Should we instead be picturing this?

Are we living in Utopia but don’t realise it?

I started thinking that for people living 500 years ago, the way we live now would actually seem like a utopia.

This would all be considered incredible, even 100 years ago. Miraculous even. But do we think we are living in Utopia? No! We are only too aware of what is wrong with our society: injustice, environmental destruction, war, pollution, climate change, inequality….

These downsides are what at the time were the unforeseen consequences of what was considered hugely beneficial.

Then what is it?

So I began to imagine: what if we created a ‘utopia’ in the UK, based upon the ideals expressed in Zero Carbon Britain and One Planet Living? What would be the unforeseen consequences?

In other words, what if we had a society which could feed everybody with food grown within the country and all energy was renewably generated? It would seem ideal to us, but what might be downsides?

First, how would it work? ‘Ecological Footprinting’ is the science of measuring the environmental impact of a society against its share of the Earth’s ‘carrying capacity’. The idea of an ecological footprint is that it is linked to laws of supply and demand. I will explore this in a later post. For now, though, on the supply side there is the availability of natural resources and the ability of the Earth to absorb the waste products and other environmental consequences from our activities. And on the demand side there is the level of population and its corresponding consumption level.

For the world to be sustainable the demand must not exceed the supply, or we are burning up the future to satisfy the present – as we are now. If the entire population of the planet lived the same lifestyle that we have adopted in the Global North, then together we would need the equivalent of at least three Earths’ worth of resources. Which we don’t have.

We are beginning to get used to the idea that sensors, meters and other monitoring equipment can measure in real time all kinds of things from energy use to traffic levels, productivity, resource use and so on. At the same time algorithms are becoming more and more sophisticated in the way that they analyse the results of all this monitoring and make use of the data processed, incorporating them in feedback loops.

If we extrapolate this tendency into the future we can imagine that a society which attempts to sustainably manage itself will use algorithms and monitoring extensively to model future supply and demand, and make corrections automatically along the way so that they’ll continue to be matched.

Where is this leading?

That was the premise for my story, ‘For The Greater Good’ in Weatherfronts. It’s all very well being able to cater for an existing population with existing productivity levels. But what if the models forecast that a population increase and a simultaneous decrease in productivity would mean that the population would suffer?

Would we want to live in this kind of world? You’ll have to read the story to find out if my heroine does!

You can read more about David’s fiction and non-fiction at his website and download a free ebook of the new anthology Weatherfronts from Cambria Books, featuring stories, poems and essays from twelve writers who won commissions from the two events that TippingPoint and partners held at the Free Word Centre in 2014 and 2016.

In May 2017, ClimateCultures editor, Mark Goldthorpe, will be chairing a panel discussion between David Thorpe and three of the other 2016 authors – Justina Hart, Darragh Martin and Sarah Thomas – at the Hay Festival.

You can read about Zero Carbon Britain and download their new report. This article from the One Planet Council describes the work of the Welsh Government’s commitment to ecological footprinting. And The One Planet Life provides further information and resources.

For an interesting discussion of the history of Utopia and Dystopia, see this set of articles from the British Library. And this article from Encyclopaedia Britannica describes ten literary dystopias (somehow managing to bypass Orwell’s Nineteen Eighty-Four).

A novelist, scriptwriter and writer of comics and graphic novels, as well as a non-fiction writer on carbon-free energy and sustainable development.
Read More