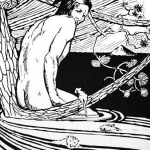 Author Mary Woodbury opens a two-part series on the development of eco-fiction: a form with many roots, which is “not so much a genre as a way to intersect natural landscape, environmental issues, and wilderness into other genres.”

You can read the second part of A History of Eco-fiction here.

When we approached the cottage in Ireland, a pair of white horses in the meadow raised their heads to look our way. Strong winds lifted their manes and tails wildly yet gracefully. We had driven from Dublin to the west coast, near Doolin, and were staying above the cliffs in a cottage. I was tired from an overnight flight and the drive to Doolin.

You look at Ireland on a map and think it wouldn’t take very long to get from coast to coast, but it takes a while to get used to driving on the other side of the road and the other side of the car. It takes special patience to understand the roundabouts, to safely navigate the narrow country lanes with no shoulders — only rock walls, with more seasoned Irish drivers whipping by at 100 km/h or faster — and to stop and smile while farmers older than dirt slowly herd their cattle across the road. My husband was the driver, as my mother and I took in the magical countryside around us. When we arrived at our destination and stepped onto terra firma, my spirits rose. I went straight over to the horses. They were the cottage owner’s animals, and it took some wading through wet, tall grasses to get there, but the horses came right up to me and allowed me to pet them and feed them hay from the meadow. Each evening, when we returned to the cottage, they were there to greet us.

And each morning, when we left the cottage, we explored the wilds of Ireland: caves, the Burren, the sea, the cliffs of Moher, and the many places we ran — which William Butler Yeats had written about. We sailed to the Lake Isle of Innisfree, a real island in Lough Gill, which Yeats was inspired to write as he walked the bustling Fleet Street of London in the 19th century and dreamed of getting away into a simpler life more strongly connected with nature. We did trail runs in Slish Wood, which was what Yeats referred to as Sleuth Wood in The Stolen Child and in the trails around the lake isle. Nearly every single waking moment of this journey was filled with sweat, wonder, being away from cities and people, and interacting with natural things and places, though at night we did hit the pubs. I sensed within the wild a great seclusion, sacredness, awe, and even discomfort at times. It was a world alive with remnants of the past. I felt free.

If my story were fiction, it might be called eco-fiction, because the story depends on natural places and the human connection therein. Many precursors to eco-fiction exist, and Yeats’ early work — such as The Lake Isle of Innisfree and The Stolen Child, which dream of escape to the wild from the Victorian world he was locked into — might be considered one inspiration for the modern literary field. Later, he sought this escape via mysticism, but the early roots were steeped in Irish mythology:

For he comes, the human child,
To the waters and the wild
With a faery, hand in hand,
For the world’s more full of weeping than he can understand.

from The Stolen Child, WB Yeats

One of the largest works describing Eco-fiction is Jim Dwyer’s Where the Wild Books Are: A Field Guide to Eco-Fiction (2010). He researched hundreds of books and stated that his criteria in choosing whether or not a book was eco-fiction were:

Another definition is by Mike Vasey (referenced in Dwyer’s book):

“Stories set in fictional landscapes that capture the essence of natural ecosystems…[They] can build around human relationships to these ecosystems or leave out humans altogether. The story itself, however, takes the reader into the natural world and brings it alive…Ideally, the landscapes and ecosystems–whether fantasy or real–should be as ‘realistic’ as possible and plot constraints should accord with ecological principles.”

Some descriptions are simpler. Ashland Creek Press calls it “fiction with a conscience,” and one of the press’ co-founders, John Yunker, via personal correspondence, called it a super-genre. I think of eco-fiction not so much as a genre than as a way to intersect natural landscape, environmental issues, and wilderness — and human connection to these things — into any genre and make it come alive. I am not big on labels or boxy terms, but eco-fiction is broad and has a rich history.  Eco-fiction has no boundaries in time or space. It can be set in the past, present, or future. It can be set in other worlds.

“The earth is an eco-system. It possesses a collective memory. Everything that happens, no matter how insignificant it may seem, affects in some way at some time the existence of everything else within that system.
Eco-fiction raises important questions about man’s place in the system:
Will man continue to ignore the warnings of the environment and destroy his source of life? Will he follow the herd into the slaughterhouse?”

So the first time the term eco-fiction came about, it contained stories going back to 1933. But, like with many living things, this type of literature has roots and branches and an ever-extending canopy. According to Dywer, precursors include magical realism, pastoral, mythology, animal metamorphoses, and classical fiction. Like with the anthology edited by Stadler, science fiction roots are evident as well. Environmental science fiction and ecologically oriented weird fiction go back far, because, as with Yeats’ and others, writers in every field have always worried about the trappings of walls and cities and refinement and wondered about the kind of life where one can “come away” to the “waters and the wild”. We can find such concerns in J.R.R. Tolkien’s fantasy works, too, which often pit machine and greedy power vs. an imaginary (but not unrealistic) natural world. Patrick Curry wrote an article titled Tolkien and Nature at the Tolkien Estate, stating:

“Tolkien…returns readers to the animate, sensuous, infinitely complex nature that humans have lived in for nearly all their 100,000 years or so, until the modern Western view of nature as a set of quantifiable, inert and passive “resources” started to bite only 400 years ago. Middle-earth is real because despite our modernist education we recognize it.”

There’s a long lineage of works in this canon, from early myths of weather gods and goddesses such as Thor, the thunder god, or Susanowo, the Japanese Shinto god of storms and sea. There’s Noah in the Bible and Shakespeare’s The Tempest. In 1759 was Samuel Johnson’s Rasselas, which dealt with regulation of the weather. Various storms, such as floods and winds and ice storms and fire, figure commonly in eco-fiction plots — but stories do not have to be apocalyptic; they also can be subtle and thoughtful.

We cannot ignore notable nonfiction that has inspired fiction movements, including nature writers and poets such as Rachel Carson, Margaret Fuller, John Muir, Henry David Thoreau, John Burroughs, and Ralph Waldo Emerson. Nearly every era of human-time has had its nature lovers who take to the pen to exalt nature or politicize our impacts on the wild, from St. Francis of Assisi to Gary Snyder to Upton Sinclair to Michael McClure to Naomi Klein.

One might say eco-fiction first began as cave drawings of animals and birds, which documented an era of humans connecting with their environment, and did so with storytelling via art; but the term became popular in the 1970s when natural history evolved among biologists and ecologists, and  nature writing with a sense of advocacy grew in literary study (ecocriticism), nonfiction, and fiction. Along with other environmental movements, the study of ecologically oriented fiction began to bloom and there became a sense of morality in storytelling. We have to be very careful in storytelling to be true to art forms, however, and not be preachy. Eco-fiction novels and prose zoom out to beyond the personal narrative and connect us to the commons around us –- our natural habitat. Previous literary scholarship often ignored this crucial connection.

In Part 2 of A History of Eco-fiction, Mary looks at how this “way to intersect natural landscape, environmental issues, and wilderness — and human connection to these things — into any genre” has been evolving from these earlier expressions and will return to the personal journey to her Irish roots.

For the articles and books mentioned in Mary’s piece:

A fiction writer, researcher and curator of websites exploring ecology in fiction and providing ecoliterature resources for writers.
Read More

The latest feature of recent work from our members is Standing Tall, 2022, a photographic and video work from writer and artist Jennifer Leach witnessing creative community resistance to the corporate felling of 112 trees and the sacrifice of a city’s green lung for more concrete. Explore this and 18 other works: comic books, courses, film, fiction, nonfiction, memoir, music, poetry, visual art, zines and more.