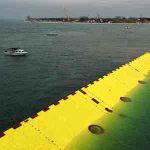 Artist Mary Eighteen discusses powerful associations of hope she sees between the 20th-century art of Barnet Newman and a 21st-century technology that will protect Venice and its Renaissance heritage from some of the impacts of manmade climate change.

In his essay, The Sublime and the Avant Garde, Jean Francois Lyotard refers to the Abstract Expressionist Barnett Newman, stating that “In 1959-51, Barnet Newman painted a canvas measuring 2.42 m by 5.42m which he called Vir Heroicus Sublimis. In the early sixties, he entitled his first three sculptures Here 1, Here 11, Here 111. Another painting was called Not Over There, Here, two paintings were called Now, and two others were entitled Be. In December 1948, Newman wrote an essay entitled The Sublime Is Now.

In order to explain a point regarding the physicality of experience in Newman’s painting, Vir Heroicus Sublimis, I want to recall a visual encounter I experienced on a trip to Venice on a cold evening a few years ago.

On this cold and still February night I am with friends, poised on the Canal Grande. There is a feeling of lingering melancholy for which Venice has become legendary. There is a smell of decay generated by the water. The smell is not invasive, more a lingering odour of oldness that infiltrates the senses with eerie persistence. It is an odour that caresses, like a whisper softly spoken, its essence apparent in each wave and ripple that skims the water’s edge. Venice touches my soul like nowhere else on earth, like an inner sanctum of ethereal magic.

Amidst the dark, I see the church of Chiesa San Giorgio Maggiori, rising like an apparition against the darkness of the night. The whiteness of the front façade, designed by Palladio, is almost phosphorescent. It looms against the sky as if to affirm a past still deeply rooted within the here and now. It mingles with the ever-pervading odour of oldness, transcending the story of the past into the world of the present with an intoxicating pungency. Looking at the ghostly apparition of Chiesa San Giorgio Maggiori at night, I am reminded of the vulnerability of Venice to the sea. Venice has a history of flooding but the idea of the city sinking into the sea is more than most people could tolerate, and much money has been spent to avoid this ever happening. But this is no less a conundrum than climate change, our own vulnerability to rising sea levels and their future effect on humanity.

Like my encounter with the melancholy of Chiesa San Giorgio Maggiori at night, so Newman’s Vir Heroicus Sublimis was designed to be a physical experience. Palladio’s fine front façade, in raised vertical splendour, emanates a celebration of hope for the future in a city that transcends both past and present in equal measures.

Newman’s paintings do the same. He referred to the stripes that dominated many of his paintings as ‘zips’. I look at a Newman painting and I see the same encounter with hope as I experienced with Chiesa San Maggiori that cold still night in February in Venice. I have spent a lifetime loving Venice and being fascinated by water, but I did not know then as an artist how involved I would become with ocean toxicity and the future of our seas. Within this scenario, Venice resonates a certain fragility in its relationship to the water.

While Newman’s paintings and Palladio’s façade transcend hope within the dark, there is 21st Century hope within the ground-breaking Venice Flood Barrier, known internationally as the Mose Project. Newman and Palladio inspired a future generation of painters and architects; Mose inspires the future in terms of protecting Venice from rising sea levels.

The flood barrier is positioned along three sections of the lagoon: the Lido Inlet, the Malamocco Inlet and the Chioggia Inlet. The barriers form an integrated system of mobile gates that, as it were, step into action in times of rising sea levels that will cause flooding. While there are controversies regarding the Mose Project, it is there to protect. The yellow structure, spread horizontally over the lagoon like a brilliant yellow Barnet Newman Zip, is indicative of not just hope for the future of Venice, but the hope that is represented vertically in Newman’s messianic Zips and Palladio’s facades.

If I were once again standing in Venice on a cold February night looking over the lagoon, I would ponder the yellow Mose Barrier. For within its stretch there lies a paradox. While the barrier protects Venice from the sea for however long that will be, it is also indicative of mankind’s continual disruption of the environment, which is causing the rising levels of the sea, and our need to protect that environment, and in particular our oceans and seas, from us.

Newman’s Zips and the vertical façade of Palladio’s Chiesa San Giorgio Maggiori gave hope within the optimism of post war American Abstract Expressionism and the humanism of Renaissance architecture. Similarly, the new Venetian flood barrier straddles the lagoon as a symbol of defence that is a reminder of our duty to defend against rising sea levels by vigilance and human responsibility.

You can read Jean Francois Lyotard‘s essay The Sublime and the Avant-Garde in The Lyotard Reader, edited by Andrew Benjamin, Blackwell Publishers Ltd 1998

Barnet Newman‘s The Sublime is Now is in Theories of Modern Art, by Herschel B. Chipp, University of California Press.1998

You can read about the Mose Project in this 2015 article from the Guardian, “Inside Venice’s bid to hold back the tide“.