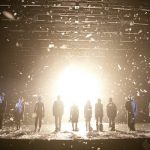 Dramatist Julia Marques reflects on her research for an MA in Climate Change: Culture, History, Society, and the role that theatre can play in opening up space for us to take in what climate change means for us.

“The sources of our disagreement about climate change lie deep within us, in our values and in our sense of identity and purpose.”

– Mike Hulme, Why We Disagree About Climate Change (2009)

Throughout the past year, when I tell people that I’ve been studying climate change, there have been some responses that have prevailed over others.

And, inevitably, certain world leaders also crop up fairly regularly. (On this point, I would like to quote Mike Hulme, who rightly states that “One man does not control the world’s climate”).

I want to discuss why these responses are difficult to give a simple and straightforward answer to, and also how they reflect why climate change is a complex concept that is more than just extreme weather.

First of all, the fact that people are still asking this (Question  #1) — in spite of the fact that the majority of scientists agree that it is — indicates that there is more going on here than merely deciding on which side to support. People form beliefs according to their cultural values, and if an idea threatens those values, then people are, understandably, wary of it. Therefore, even if you trot out the mountains of evidence for climate change, this does not automatically result in a change in view on the matter. This is frustrating, of course, but, as Dan Kahan points out, more focus needs to be placed on how we communicate the science that will appeal to people from diverse cultures. Once this has been cracked, then we can better understand why people feel and react differently to climate change instead of simply rejecting those who do not agree with us.

“The prevailing approach is still simply to flood the public with as much sound data as possible on the assumption that the truth is bound, eventually, to drown out its competitors. If, however, the truth carries implications that threaten people’s cultural values, then holding their heads underwater is likely to harden their resistance and increase their willingness to support alternative arguments, no matter how lacking in evidence”

Secondly, is climate change really a ‘problem’ that needs “solving” (Question #2)? Framed in this way, it is easy to talk of solutions to climate change, and to declare war on it as if it were a sentient being which had chosen to attack human beings in particular. This discourse of war appears to pervade into every sphere of life; the war on terror, the war on drugs, the war on poverty — to name but a few. For some reason, humans love declaring war on things. Especially large-scale hard-to-comprehend things.

Mike Hulme proposes climate change to be an idea, and, in this light, it certainly does not require any ‘solutions’. This somewhat relieves the pressure that climate change exerts whenever we see extreme weather events and melting ice as only more evidence of the destruction we are wreaking on the world. This is not to say that we can sit back and do nothing but, for me, constantly searching for a quick-fix solution is not helpful when it comes to climate change.

What we need is space to consider our options and what climate change means for us individually. Yes, we know about the stronger storms, the higher sea levels, the increasingly severe droughts, the mass migration, etc. But what does this mean to me, to you, to the person sitting next to you on the train, to the couple with the baby you passed in the park, to the old lady you saw at the bus stop? What meaning do all of these people give to climate change?

This ties in with my evolved focus of my research. In it, I ask myself if theatre can be an alternative site of meaning-making around climate change that allows people to have space to think about the idea of it that is being re-presented in the performance space. I want to get away from a didactic version of theatre, which is oh-so-easy to fall into when considering concepts as huge as climate change. I want to give people the option to decide, to make up their own mind about it, rather than offer solutions to it. We need to give ourselves space to think. I argue that both the plays I am using as empirical examples in my research create this space in different ways — whether through staging, lighting, sound, dialogue or action. This is the beauty of theatre — it offers the flexibility of its various techniques to be used in a multiplicity of ways to create manifold effects.

The two plays that I studied for empirical examples of this space were Greenland (2011) by Moira Buffini, Matt Charman, Penelope Skinner and Jack Thorne and Earthquakes in London (2010) by Mike Bartlett. Both plays did create space, but with differing techniques. As can be seen from the Greenland photos, the stage was a vacuous darkened space most of the time, thus creating physical space. Earthquakes, by contrast, is a chaotic play with little physical space, but pause in dialogue was the source of space for thought on climate change instead.

In a city like London, space is at a premium, and I’m sure most people would appreciate having a little more of it. We are constantly bombarded with information, advertising, people and sound. How can theatre be a place of respite from this, to focus our thoughts on one particular aspect of our intricate lives and allow us then to mull it over without the pressure to make an immediate decision on it?

To conclude, ‘saving the world’ is a rather grand and complex task (Question #3). My MA course was not, as I had hoped, a series of classes on how to stop environmental degradation and limit our carbon dioxide emissions. In fact, it presented me with far more questions than answers. Climate change tends to be a rather gloomy subject, I have found, but it also highlights the potential of what can be done.

As George Monbiot says, “What appear to be hopeless situations actually are not hopeless at all. All you need to do is to imagine a better future and then put that imagination into practice”. My aim is not quite to save the world, but to give it a chance to stop, take a breath and ponder what can be done. And then go out and do it.

“I know two days is just a blip but . . . that’s what it is, a pause, a breath, where we can look at it. Bear witness, my boss says – where we can really think, is this the future that we want?” (Lisa – student/activist – Greenland)

Mike Hulme‘s book, Why We Disagree About Climate Change: Understanding Controversy, Inaction and Opportunity (2009) is published by Cambridge University Press. And Julia refers to MIke’s blog post (7/6/17) One Man Does Not Control the World’s Climate.

You can see George Monbiot talking about how “What appear to be hopeless situations actually are not hopeless at all” in his video on YouTube, which is well worth watching despite its unimaginative title, This is Why Donald Trump Can’t be Human.

A climate change dramatist, activist and communicator specialising in social and cultural aspects of climate change who has worked in the nonprofit and media sector.
Read More