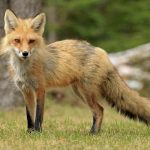 Writer Brit Griffin lives in Cobalt, Canada — a town that was born during the 1903 mineral rush. She shares a powerful account of signals to be detected in Cobalt’s burning forests and the cry of a fox.

Brit’s post is the second in our series Signals from the Edge, which sets the challenge: to create a small artistic expression of the more-than-human in the form of new signal for humanity. Is it a message — whether meant for our species or for another kind, which we overhear by chance? An artefact of some other consciousness? Or an abstraction of the material world? Something in any case that brings some meaning for us to discover or to make, here and now, as we begin to address the Anthropocene in all its noise. A small piece of sense — common or alien — amidst the confusion of human being.

Wildfire and fox: dispatches from forests burning in Cobalt, Ontario

Summer 2018. Woken up by the smell of smoke. Summer night and the windows are thrown open, the wind sending traces of Temagami forest’s burning drifting into my room. The forests behind Elk Lake are on fire too. I don’t know it yet, not then in the night, but so is the faraway Arctic Circle. Does taiga smell the same as birch and jack pine when it’s burning?

It’s disorienting, the darkness, the smoke, at first I thought it was the stoked ashes from a dream, but then there is a shrieking and I am fully awake. Then I hear it again, riding these night breezes thick with carbon, insistent and piercing. It is, I think, fox.

I am used to her screams now — but still they are uncanny. She is calling through the darkness, and we all listen, me, dog, cat. At the window now listening. Is she far away or close to the house? Impossible to tell, the spooky cries passed from tree to tree. Just like a banshee’s wails along the valley. No wonder folks believed in such beings. The sounds tonight, stirred and mixed with the smoke, maybe belong biologically to fox, but are otherworldly too, spiritually something else.

But what? At one time, people might have recognized all of this with more ease. Folks had their nature spirits, saw forests teeming with magic. It would be standing room only on a night like this, what with the burnings and the keening.

Could be time to try and find those things again — the beings and the creatures that we have forgotten. That we can’t see anymore. That we cannot hear anymore. Cannot hear that sublime singing of the trees, each one with their own song, cannot hear either their ultrasonic distress signals when they are parched.

We used to listen to trees, talk to them even (and not in a ‘let’s put on Pachelbel and be nice to the jade plant’ kind of way). When nature was magic we would turn to its wisdom, seek solace from oak trees, leave tokens at deadfall for the spirits. The forest was not something to be managed, not a site of resource extraction, not a source of consumables. They gave us things, of course, the forest and the fields. Timber, firewood, plants, medicine, game and berries, but also wisdom, guidance in surviving, companionship. Everyone needed parts of everyone else.

Living so close, paying such attention, it changes the relationship. Like being in love.

But we can’t be close if we are on the outside looking in. As it is now, we are only visitors, not companions, equals, comrades in arms. Removing ourselves from nature, setting humans apart from that teeming forest of magic, was probably a mistake. Probably has landed us in this global fever.

Little creeks dry up, creeks for frogs and sprites. The sprites, of course, went extinct long ago. Many frogs are likely to follow. The triggers for frog mating are temperature and rainfall. All this dry, all this heat? Frog romance taking a beating.

So maybe the separation of the human from the non-human is a boundary or barrier we should try to dismantle. To see what seeps through. Because all those binaries — they are helpful in sorting objects and events into categories, organizing things. But we aren’t sorting our closets, we’re trying to salvage our world. None of them, human/non-human, life/death, magic/science, irrational/rational, can help me understand what fox is trying to say.

I can only hazard a guess:

fox says it is ultrasonic in the woods tonight,
wonders why can’t I hear it.

Note: Brit has also recorded a special video of her reading Wildfire and Fox, published simultaneously with ClimateCultures as The Summer the Planet Burned: Radio Free Cobalt:

Brit Griffin lives in Cobalt, Ontario, a town that was born during Ontario’s last mineral rush in 1903 — a silver rush that was pretty much over by 1919. Current population: around 1100.  http://cobalt.ca/visitors/history/

Temagami is a world-renowned tourist destination known for its wilderness lakes and old growth forests. It is also home, and always has been, of the Teme-Augama Anishnabai on Bear Island. Elk Lake, a town of around 500 people, survives mostly on its timber mill.

Many sources which have expanded our understanding of the science on trees over recent years. Two interesting articles are: Trees Make Noises, and Some of Those Sounds Are Cries for Help by Rachel Nuwer for The Smithsonian (16/4/13), and Trees Have Their Own Songs, by Ed Yong for The Atlantic (4/4/17). As the Smithsonian article points out, “knowing what kinds of noises trees in distress produce means researchers may be able to target those most in need of emergency waterings during droughts.”

The Atlantic article is a review of David George Haskell’s 2013 book The Forest Unseen.

You can find out more about the forests burning in northern Ontario in this article from CBC, Radio Canada (19/7/18) by Benjamin Aubé, Some provincial parks in Temagami area closed due to forest fires could re-open soon, which reports a quadrupling of forest fires in the region. The fire was called the North Bay 72 and a good part was on the traditional territory of Temagami First Nation. You can read and hear a disturbing report on forests burning across the Arctic in this piece from CBC, ‘We ain’t seen anything yet’: Even the Arctic is burning as wildfires rage around the world’; it features an excellent interview with Ed Struzik, author of Firestorm: How Wildfire Will Shape Our Future.

The lands manager (Robin Koistinen) from Temagami First Nation said of the recent fire, on Facebook, “Mother Nature did some major housecleaning! In recent memory, no one knows of a larger fire on nDaki Menan, almost 28,000 hectares, there are 10,000 hectares in a Township! A township is 6 miles by 6 miles or 10 km by 10 km! So figure out the size of this fire in Square Kim’s, or miles! Big big Fire.” Her Facebook post includes this video footage flying over the damage from the fires.

Sue Nielsen, who took the photograph of the fox, is reporter and photographer for the local newspaper, The Temiskaming Speaker. She takes wildlife photography around the area.

Author of three near-future cli-fi novels and a writer of poetic/story musings, whose interests lay in reconciling with non-humans and exploring the human/creature boundaries.
Read More