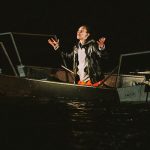 Filmmaker James Murray-White returns, fresh from a trip to Hull, City of Culture 2017, to bring us his review of the remarkable and immersive performance of ‘FLOOD’, a production that’s “exploring our humanity and responses to the world”.

This past weekend I happened to be in Hull, City of Culture 2017, and stumbled upon an extraordinary multi-media and immersive piece of theatre about climate change and the human condition. ‘FLOOD’ is a year-long project, written by James Phillips and produced by Slung Low, a theatre company based in Leeds that ‘specialise in making unlikely, original and ambitious adventures for audiences.’ And they excelled with this production, told in a dock on the edge of Hull.

Part climate change drama, part biblical parable of human foibles and virtues and community self-determination, and chiefly a story of humanity telling its story in and about a “city by the sea”, ‘FLOOD’ is a captivating, urgent, and sometimes mesmerising drama, told in the water it tells of.

Setting it and performing it in the dock – with the audience clustered round the railings looking down into it and the action happening on a floating set tied together and sometimes coming apart, with little boats navigating to and from them, and even actors in the salty brine, “near drownded” — makes this a literally immersive piece, engaging the audience’s senses while we huddled and shivered as one in awe, and a lot of sadness.

The drama takes us into several characters’ experiences of sudden, violent change. It’s held by a central character, who we come to know as Gloriana. We first meet her as she’s ferried into dock by a fisherman and his son, telling of “one net empty of all fish. In it, one hundred life jackets. Orange like those migrants leave on beaches. One hundred life jackets and a girl. Curled pale naked, just bandages on hands. A drowned girl but….”

Gloriana is very much living flesh and blood, but after her ordeal has resurrected into a reflection back upon each characters’ motivation and input into life. She’s received by Jack, an officer in a detention centre, and their lives become interlinked. Gloriana meets Johanna in the centre, described as an Iraqi Christian; and then Natasha – former Overseas Minister and now Lady Mayor – and her daughter Kathryn. These and the fisherman and his son Sam all hold the drama fast and furiously, bound to each other as water to land, and sea to sky, as humans caught in trauma, seeking salvation.

The drama reaches into our current migrant crisis, and the ex-Minister’s role is partly to provide an exploration of guilt and political responsibility around this issue. This theatre piece took place in a city covered in statues to its former ‘great and the good’, from Ferens and Wilberforce to De La Pole, all of whom are honoured but who all might now be seen to be culpable in the light of current political thinking, be it on votes for war, whaling, lack of action on carbon measures, or similar. The presence of a character who has sanctioned wars, who now has the opprobrium of her daughter and protestors outside her house and who takes a role as a leader when the floating islands become a necessity, opens up a whole strand of moral dialogue, guilt, and responsibility. Like writer James Phillips, I’ve also spent time volunteering at the Calais Jungle, where many thousands of refugees have headed in the hope of getting to the UK; once you witness such a place and hear some of the stories about fleeing atrocities, both human and climate-caused, then the full spectrum of humanity gets peeled back, and any response is a response.

A thing worth living for

Once the characters are afloat on the islands, bound together in tents, nailed together with pallets and bodged together as a refuge, then we see three different and distinct camps. The first, led by Johanna, uses faith to hold itself together, even evolves to sending out missionaries in boats to proselytise that faith to other survivors (which then horribly backfires). The second, led by Natasha, is titled Renaissance as a bastion of ‘law and order’, despite the Government in the South falling and power being shown to be nothing other than what we construct it to be. And in the third camp Sam, the fisherman’s son, gains power by violence and control; torture and murder dominate on his island. None of these three options appeal to me – so I would be a lone wolf, snaking between them all in my kayak, bartering fish in exchange for human contact and a little piece of the values that each offers.

Gloriana lives, and is either revered (by Johanna) or feared and hated (by Sam), and tries to reflect back to every character their inner nature; including Kathryn, with whom she falls in love. Her journey as a presumed fleeing migrant, with letters carved into her fingers and signs of torture upon her body, to death in the water, resurrection in the net and then becoming an angel upon the water — and literally sailing off into the rising sun — is the redeemer’s journey. The arc of the entire play is that all we have as humans is love. Faith may sometimes help, and faith will bring troubles upon us, but love will give us something worth living for. An unusual thread of lost love between the fisherman and the Lady Mayor brings an extra complexity that weaves within the narrative.

The night I saw FLOOD was the omnibus event, so we saw part two on the water, were herded to a nearby marquee to watch part three on a screen, then returned to the dock for part four. This helped to engage us further, pulling us together with the bribery of heat and tea and food, reminding us of communality and needs, while the characters were suffering the greatest calamity known to humankind.

Part one of this epic had already been screened online, and I understand that part three will be available for a limited time on BBC iPlayer, and clips are on the FLOOD website. So the scope of the production is being mediated both live and online and I hope it reaches a wide audience, as it needs to be seen. Standing watching the drama — encompassing back-projection onto water, water sprayed as rain above the actors, fire on stage, and the constructed encampment-islands amidst the water, as the characters become migrants on the world’s seas — is a visceral experience which will forever bind me to the story and the experiences being told. That is very different to watching anything on a screen, but the two ways of experiencing this drama make for a very powerful and urgent experience.

For me personally, as a graduate from Hull University’s drama department, which I left many years ago to head off into a career in the arts and became disillusioned by a theatre system that seemed dull and even unconscious during the 90’s and noughties, seeing this production in Hull, amidst a vibrant year of culture — stimulating and prodding and exploring our humanity and responses to the world — is joyous and so exciting.

The bigger picture, well — where will we go from here? As creatives, mediating dialogues and inquiry across artforms, as leaders, as animals within a system, and as a species afoot in the world? We may be bringing the rains down upon our heads, and there may be individuals or systems we can follow, and there will always be love.

And the last line of stage directions from the play: ‘A little boat disappearing into the light’.

The BBC’s showing of Part 3 wasn’t available at the time of publishing this post — but it’s the BBC, so it will no doubt be round again before you know it! Check out the episode page on their site.

You can see ‘FLOOD — the story so far’ on YouTube.

You can explore some of the issues around sea level rise, coastal change and flooding affecting the Humber region, including Hull, at the EU FloodProBE site.

You can find out about the work of the UNHCR  the UN’s refugee agency – on climate change and refugees.