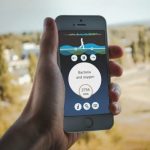 Writer Mark Goldthorpe reviews the Deep Time Walk app, taking its blend of geology and biology on a walk into local woods, guided by its Fool and Scientist, to explore 4.6 billion years of Earth’s history towards Now.

“We will see how one thing jumps out of another thing, the second thing completely different from the first thing. We will see impossibility. Second steps may be unlikely but first steps are impossible! But impossibility isn’t a problem. It doesn’t stop anything, it only maybe slows it down. It is a weak wall; everything is always pushing it down, striding straight through it.”    – The Fool

This is a walk through 4.6 billion years of Deep Time of Earth’s history towards Now. A walk taken by a Fool and a Scientist, trading insights, knowledge and deep questions as they go — and along the way they bring us into their explorations of life and our world. This blend of geology and biology is the story of us and all the others that have made the long journey before and beside us. Of how non-living and living matter shape and adapt to each other, freighting oxygen, hydrogen, carbon and other essential elements through their loops and feedbacks. Travel is important to this story – it is the story – and a walk with expert guides is the perfect vehicle.

The team behind the Deep Time Walk App has just celebrated reaching their crowdfunding target, matching Heritage Lottery Fund to develop the project further. But the app is available now and is well worth exploring. The first interactive mobile app of its kind, Deep Time Walk accompanies you along Earth’s entire geological timeline (so far), and can be taken anywhere in the world — in countryside or urban settings. Moving at a scale of 1 metre to 1,000,000 years, its two guides and a third narrator take in the cosmic beginnings and shape-shifting early aeons of the planet, through the mysterious emergence of life and the long struggle to multicellular organisation, and the coevolution of life with oceans and atmosphere and land. This is a creative and expert overview, combining sciences and humanities to take in the grand and the minuscule scales of what we are made from and who we are: the biosphere amongst hydro-cryo-litho-pedo-atmo-spheres.

If you want to enjoy a walk of a few miles then you’ll probably choose a new walking companion with some care – especially if they are going to do all the talking! So a guide like this requires good writing, sympathetic narration and a high quality production. Fortunately, Deep Time Walk boasts all three and will enhance your stroll through either a familiar landscape or a first-time encounter. I’ve listened in full three times: on a walk through my local woods; a trek to my nearest train station and then on the journey itself; and as a conventional audiobook at home. There was something new each time, such is the wealth of knowledge packed into the story. And the app team’s decision to involve three voices — three characters in narrator, scientist and fool — enhances the impact of all that information. And the conversational tone engages the listener as a fourth character, which is key to making an experience that rewards repeated listening. No surprises that the text is brought to life by professional actors: Peter Marinker, Chipo Chung and Paul Hilton are voices you may recognise from many radio and TV productions.

Time and the body: working on a human scale

Pacing is important here, and although the walk takes you at a steady one-metre-to-the-megayear rate — calibrated to your pace when you enter your height into the app — it is able to take in varying rhythms of geological and biological change. Partly this is down to well-timed pauses along the way, as you’re encouraged to stop and enjoy the view while the characters explore key transitions in detail or they review the journey so far to emphasise key points. Mainly, it’s down to the quality of the writing and the interplay between the scientist and the fool, which strikes a balance between ‘informative’ and ‘entertaining’ as the content requires. Fool and scientist are far more than the stereotypes they could easily have been cast as, showing emotional depth and at times either supporting the other through doubts or picking up on their assumptions. In other words: human beings. And, throughout, the changing planet is itself treated as a personality. Only very occasionally does this risk straying into ‘Mother Earth’ speak, but never steps too far. And this is, after all, the territory of Gaia — the Earth-System-as-lifeform metaphor, which can sometimes revert into Goddess talk. If that’s your thing then you will find the occasional references to her pleasing; if it’s not, they are too occasional to get in the way of the fascinating science and the real wonder of how and what this world is, and how we have come to understand so much and yet so little of it. If you can’t take a good metaphor for a walk, who can you take?

The app comes with a glossary, which you can access at various points through the story to learn more about the terms you are hearing. As far as I could see, there’s no way to scroll through this independently of the narration, which would have been handy at times when I wanted check with something later. So, if you want to know more about the solar system’s Gas Giants then you’ll need to check that when they crop up during your few metres walking through the “arrival of liquid water” (partly on asteroids swung into Earth through the orbital slingshots of Jupiter, Saturn and Neptune); the glossary then moves on to consider this Late Heavy Bombardment in more detail. But you won’t want to keep interrupting your walk to check the screen and pause the narration, so the glossary is best explored later on; you can set the app to ‘walk free’ mode and just sit back to take the tour with an eye on the screen. With that in mind, it’s a shame the glossary can’t be searched independently on the app, and doesn’t appear on the website, because it provides a lot of extra detail in a concise and very readable format. Maybe that is an area that the new crowdfunding support will help the team to develop.

I’d also have liked to see part of the narration encouraging me to connect what I was hearing to what I could see around me on the walk. That couldn’t be truly interactive of course — at least in this phase of the app’s development — but it would be possible to pose questions or give pointers to things we might encounter on a typical urban or rural walk. Thinking of the natural geology that we’ve transformed into buildings, roads and other infrastructure, for example, do we ever stop to consider how long ago the rocks and minerals were laid down, the journeys they have been on as volcanic, tectonic and weathering activities have shaped and reshaped them? And my woodland walk sparked off many associations with what I was hearing about the development of photosynthesis and the accelerating diversity of early life.

But these are very minor issues compared with the ambition of the project to bring Deep Time to life or, as the creators say, “make the unfathomable, fathomable”. It’s an ambition that this beautifully designed app delivers on. I will be very interested to see how it develops further with the new funding – and how artists and others make use of it as a creative stimulus or maybe a tool in their own explorations of time and change.

And the last section of the walk? The final metre is a million years, just like all the others, so that’s a mere 20 cm for the time our species has been on Earth, give or take. We leave the last Ice Age just 1.3 cm behind our Now, and we’re just a fingernail deep into shaping the Anthropocene… Where next?

You can read about the history of the app and the team of scientists, writers and artists behind it, at deeptimewalk.org. You can download the app for IOS or Android via the Deep Time Walk website or direct from Apple Store or Google Play.

In this Aeon article from October 2016 David Farrier, a literary scholar at Edinburgh University, explores the meeting of Deep Time and the Anthropocene, where our “need to imagine deep time in light of our present-day concerns is more vital than ever. Deep time is not an abstract, distant prospect, but a spectral presence in the everyday.”

Back in 2014 — or about a micron or two ago —  the Smithsonian magazine reviewed Imagining Deep Time, an art exhibition then showing at the US National Academy of Sciences, and you can see a gallery of the images.