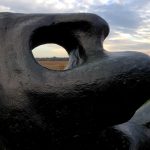 Filmmaker James Murray-White describes taking part in the Small Earth conference within the stunning beauty of Snape. At this special event, psychotherapists, ecologists, economists, philosophical and spiritual thinkers gathered to address hope for future living within the ecosphere.

“Get the tools you need to understand where we’re currently living: in the belly of the beast.”

The starting question for this powerful converging and sharing of minds in the wonderful location of Snape was “Can we return to living within the terms of Earth’s ecosphere?” And this question was minutely probed and dissected over an intense, sometimes gruelling, sometimes uplifting and ultimately rejuvenating four days. The choice of location was sublime: a place I know well and often regret I don’t spend enough time in — a place of water, reed beds, and the wonderful vast skies with multiple colour gradations to dream within; absolutely a setting to contemplate the miracle of our time on the blue dot of our earth.

A miracle indeed, but a miracle that our human species has been bent on destroying — and this convergence was aimed at therapists and psychologists with a passion to serve the planet through their work.

Here was a chance to listen, to talk and share, and also to grieve for the pain of the world.

To start each day, psychotherapist James Barratt offered us all the opportunity to share into a social dreaming matrix: a space to hear and reflect upon each others’ dreams. It feels particularly useful when a group has come together for a few days and is going through a process together, on any level. I found this powerful group process took us very deeply into our collective unconscious, and it was a strong learning to hear dreams and then have the chance to collectively unpick what they might be saying: finding threads and applying our experience to them.

As one of the few non-therapists attending, I dipped deeply in and needed some time to dip out. I found that it touched into lots of the work I’ve done since an MSc in Human Ecology at the (sadly now defunct) Centre for Human Ecology in Edinburgh some years back, and it was an honour to connect again with Gaelic shaman of the CHE and other institutions, Dr Alastair McIntosh — a keynote speaker.

McIntosh’s lecture on Saturday, Reclaiming what gives life, was full of his pain and passion for the human community: quoting psalms, Shakespeare, Gaelic poets; taking us with him on his journey across the island of Harris, and into the dark heart of the world of advertising, particularly the pernicious evil of the tobacco industry.

Drawing on his comments in the film Consumed, which opened the conference, he asked of us to call back the soul, by “looking at the nature of the belly of the beast”, that “the place of our calling is in the belly of the beast — don’t let it take us out of our natural joy.” The way forward is to “open up to that marginal realm where I suggest a healing will come.”

A highlight of the conference was meeting with naturalist Chris Packham, who shared ways to achieve a different way of thinking about our place within the ecosphere. Ultimately, he said, if we truly tap into our human capacity for altruism, restraint and care, we might survive: “once we recognise that we are just a keystone in our own ecological microsystems.”

Following on from this in a public lecture to four hundred of us, and accompanied by his dog Scratchy, Packham laid it on the line for humanity: “Summon the bravery. Look at it cold hard and in the face. It is an ecological apocalypse. We must act now.”

Andrew Fellows started by playing us a song of the Earth from a Siberian shaman: calling us into the Earth and reminding us of our belonging. Combining hard fact — that human activity is adding heat to the atmosphere at the rate of four Hiroshima explosions every second, and that two years ago the global human call for air-conditioning overtook our call for heating — with an analyst’s perspective, he said: “We hang (in this ecosphere) by a thin thread, and that thread is man’s psyche”. Fellows spoke passionately to our failings and our human frailties — preparing us perhaps for McIntosh’s attempts to lift us spiritually.

Mick Collins spoke to what he names the Transformocene: that age which transforms and changes within the recent and the new. This draws upon the very necessary shadow work that humanity must undertake, which Collins calls us “to do with depth.” Naming himself a ‘wounded transformer’, speaking with great passion and, as described in conversations afterwards, coming from a rich discursive life of facing inner crises and awakenings, he is emerging as an important figure in our movement for change.

I relished coming back to creativity with writer Melissa Harrison, whose conviction she says comes from being part of “the last generation that was able to play and be outside.” That reminded me of David Bond’s 2013 documentary Project Wild Thing, which uses the diminishing statistic, from his mother’s 80% spent outdoors, his own 50% outdoors playtime, to his inner-City kids’ mere 3%, as the starting place to advertise the joys of being outdoors within the world. I looked after a friend’s kids the night after returning from Small Earth and was shocked that they were up at 6 am, devouring screen time and off in distant virtual lands of warfare and commodity.

Melissa Harrison inspired too: “I can hold both hope and pain at the loss of species and changing climate, but it’s painful. Why not try to hold hope?” She suggested that we all adopt our own home patches to protect and to closely observe, if we are not already in this act of service: “this sense of responsibility implies that we are the main players in this. Keep it cared for and vibrant.”

Mary-Jane Rust gave an exemplary presentation that, for me, rounded off the few days and was grounded in doing, reflection and practice. With examples of eco-psychotherapy projects that re-engage folk with the earth, she spoke of “attending to our rage” at what we see and hear in terms of destruction and change and, with this, “becoming aware of our own emotional centre we gain a calm.” That presence, she suggests, “delivers us the present moment, and enables an attitude of reverence, humility, and an apology — to the Earth”.

These talks were followed by a range of follow-up afternoon workshops. I particularly loved the chance to forage for leaves, sticks and objects outside, and return to put them all together within an art-making workshop facilitated by Marion Green.

And I appreciated the buildings and cultural-creative environment of the Maltings, coming back to life after the end of their industrial use. The stunning beauty of Snape: the reeds, absorbing CO2, the River Alde flowing up to the buildings, and the vast East Anglian sky, all reminded me that we live in a beautiful world. It’s up to each and every one of us to deeply engage, live a life in full service to the ecosphere, as well as to the human population and all other species that inhabit it too.

My thanks to the organisers, presenters, and fellow participants of Small Earth for this opportunity. May these few days enable us to continue to serve, and to quote Mick Collins, to live a life “in discipleship to nature, and to service.”

The Small Earth conference took place at Snape Maltings in Suffolk, from 8th to 11th November 2018. It was organised by CONFER, an independent organisation established by psychotherapists in 1998 to provide innovative, challenging and inspiring continuing educational events for psychotherapists, psychologists and other mental health workers.

Mick Collins’ idea of the Transformocene is explored in his book, The Visionary Spirit. In the Spring 2018 Issue of Permaculture magazine, Mick explained: “We’re living in a time when we’re standing at the threshold of the Anthropocene – an era where humans have had an impact on the Earth’s eco-systems. In this way, the Anthropocene reflects the Spirit of the Times (zeitgeist), which highlights the degrading ways we’ve been treating the planet. In contrast, the idea for the Transformocene Age came to me after reading Carl Jung’s Red Book, which chronicles his meetings with the Spirit of the Depths. Therefore, the emergence of the Transformocene is cultivated via a deeper connection to the wisdom from the collective unconscious and through our encounters with the sacred.”