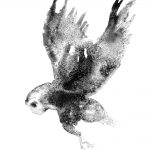 James Murray-White discovers in ‘Winged’, a new collection of words and images from fellow member James Roberts, a creative expression of the natural world’s ‘being-ness’ and a way for us to deepen our own presence within the more-than-human.

Very very occasionally — and I really mean rarely — a piece of creativity or an aspect of someone’s inner world made tangible comes into our own perspective and halts us, stops the mental chatter, and becomes a tool to deepen our ways into the real earthly things inherent in our wonderful world.

Winged by James Roberts is such a collection of crafted joy. Words gathered, and images captured: a series of poems on twelve birds in flight, their presence observed and made art by this sensitive recorder and responder, and set loose again in the mind’s eye within this isle’s wild places.

The kingfisher, in the starting poem, is variously a “little water bee”, a “little fire belly”, and finally a “little dripping dagger”, and is so perfectly matched with an illustration highlighting the downward thrust of its beak — free falling into a river kill, perhaps.

The owl, also focused downward, and yet with both wings outstretched, has

Spent its whole life
In preparation for an instant,
Learning to fix its being
To a needle point flaring lightless

And this sharp-eyed poet journeys into the unknowing knowing of “the cracks of the underworld“ and “that hole in the night which keeps watch / and waits endlessly for us to wake.“

‘Falling always out of absence into open air’

Roberts gets up close and personal with the curlew too, and sparrow, heron, swallow, swan, goshawk, lapwing, kite, golden plover, and the rook. All of them meet him and us on the path, and all become conduits for Roberts’s journey into “rapture-stillness” while we and he become “shapes imagined by a forest”.

We are never told in the work where the artist-poet is wandering the world, and it’s right that those parameters aren’t set: this is work that takes us into both stillness (and observation) and movement. It’s reminiscent of the work of wandering father of geopoetics Kenneth White in its intense focus on the birdness of the bird, the seeing and the beyond seeing.

In-between these depth-flights on winged joy with our bird kin, we are given glimpses back into the human, and specifically the predicament of the pandemic that this work and pamphlet has been created within.

Can we nail the world shut
long enough to discover everything

And yet this human world is nothing but a distraction from the simplicity, the presence, and the straight ‘being-ness’ of the world Roberts inhabits and offers to take us within (or as far as he is being taught to tread), and wait.

A presence in the meeting point

The images are graceful, and yet some use the power of the simple line to striking effect: the kite, bold, splayed across a white page; the rook, moving upward in an unhurried dominance, and the swallow, hanging in flight, its hind feathers sharply curved navigation wands. All the birds here have an iridescent blue bleach presence — with us, and yet in-between arriving and leaving, bringing us into Roberts’s meeting point with word and image. Within each bird-body, patterns give way to depth and control: I see a face in one, granulated surfaces in others, and great focus in all. More experienced birdwatchers would enjoy the specifics of their shapes, twists and turns. As a generalist, I’m seeing that these images show birds expressing themselves with their freedoms and choices. They are not conforming to any projected ‘bird qualities’, and that I feel is Roberts’s point — here they all individually are, and Roberts amongst them. And us, vicariously third hand but, with his help, able to dive a little into the shallows and beyond.

I’d like to thank James for the timing of this pamphlet’s arrival both in the world, and in my hands: just as the UK Government is relaxing lockdown (too early in some people’s opinion). I arose early this morning with anxiety about anti-social behaviour and general idiocy upon release from our houses, and the human need for company and alcohol and addictions.

James Roberts is highlighting, in his beautiful, small and yet very precise way, that solitude, close observation and engagement with the more-than-human creates a deeper joy, and a refined aesthetic that creates a wholer human.

Many thanks for your artistry and your presence, birdman.

And I’m wondering if I stand here long enough
Will I learn to feel the wind
Without wanting to know
What it’s saying?

Winged by James Roberts (2020) is available from his site, Night River Wood, where you will also find his journal and other works (including A River of Sound, a piece that James contributed to our Quarantine Connection series). James is the founder, arts director and editor of Zoomorphic, a site dedicated to writing that deepens our connection with wildlife and the more-than-human world.

James refers to geopoetics, which the Scottish Centre for Geopoetics describes as “deeply critical of Western thinking and practice over the last 2500 years and its separation of human beings from the rest of the natural world, and proposes instead that the universe is a potentially integral whole, and that the various domains into which knowledge has been separated can be unified by a poetics which places the planet Earth at the centre of experience. … It seeks a new or renewed sense of world, a sense of space, light and energy which is experienced both intellectually, by developing our knowledge, and sensitively, using all our senses to become attuned to the world, and requires both serious study and a certain amount of de-conditioning of ourselves by working on the body-mind.” The Centre is affiliated to the International Institute of Geopoetics founded by Kenneth White, whom James also mentions.