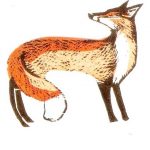 ClimateCultures editor Mark Goldthorpe reviews The Wood in Winter, an illustrated essay by John Lewis-Stempel, and finds an elegant exploration of life — wild nature and human — in the harshest season, and an Anthropocene question: who owns the land?

Under an off-white, late winter afternoon sky, climbing over an iron field gate whose bars have “galvanized the cold of centuries”, John Lewis-Stempel crosses from public road onto private land. It’s “an awkward trespass” as the wood he’s slipping into as rooks fly overhead was once his family’s land, but sold on many years ago.

“In the trees I feel safe from prying eyes, just another dark vertical shape among others: a human tree trunk. Anyway,” he adds, “no one comes looking for you in a wood.”

It’s Christmas Eve and Lewis-Stempel is on the lookout for something — “a certain thing” he remembers from his childhood in these woods. Maybe, like many of us revisiting our early haunts, he’s also seeking something less certain, something of childhood itself. But his sense of Pool Wood is of a much older place then his own family’s time, from before William conquered or “Romans trod their road to Hereford,”  a remnant of the original wildwood. Following paths made by generations of badgers, he passes through an oak grove as dusk falls around him, the bare oaks revealed as “temple pillars of a lost civilization.” And an air of dismal, darkling days seems to extend throughout the natural world: winter is a harsh and hungry season, the ground bitter hard, even the “toadstool smell of woodland” frozen solid. “From one ivy clad ruin a wren, as small as a moth, peered at me. It was too feeble to tisk its default alarm.”

An Ice Age in miniature

In a season of dearth, with redwings and fieldfares — “the Viking birds” — descending from the north and taking the holly berries, he has returned to these old woods hoping that a lone female holly tree he remembers from his grandparents’ time has survived the avian plunder. And there, in the clearing, he finds her — “Just as always.” He has come out without gloves and without a knife, so retrieving his small harvest of holly is bitterly cold work and a little bloody, but necessary. “As a good grandson of the country, I do not care to be without holly at Christmas … As boy and man my grandfather had gathered holly from the tree in the clearing. On that Christmas Eve I was his picture echo down the century.”

The Wood in Winter is a little book — just 12 pages, an essay in simple and elegant text reflected perfectly in winter colours through illustrations by Angela Harding — but it captures something essential in the season. Winter makes, as he says, a hard life for the birds and other creatures under the bare trees. We look for signs of rebirth and a new year to come — in the evergreen holly, for example, “an arboreal metaphor for eternal life” through its association with both the birth and death of Christ and with a hope of new life. And yet a naked wood under snow in midwinter is more than a promise; it “is existence stripped back to the elements. It is the Ice Age returned in miniature.”

‘The winter came upon her before she reached home’

Lewis-Stempel finds comfort, or something like it, from the nature of the wood, of land, as ‘other’. Badger and fox, like bramble and oak, are the ancient landowners. “Humans never really own land, do they? It belongs to the eternal animals.” And we can take some solace from that, even as the ancient landowners struggle their way through another bleak turn of the cycle while we try to insulate ourselves, for the most part, from such an elemental existence. The fact that for many of the creatures the struggle must end in death is nature’s price, while — for comfortably off humans anyway — winter is now something to enjoy “as a livener, a quick tease of the elements before resorting to their central heating.” But there is an unnatural price too: payment due for that distance from nature that the human tries to assert. And this price is in part marked by a growing understanding that ‘eternal’ is no longer a true description of any creature, not even in human terms.

Who owns land, truly? The author’s family once owned this parcel of woodland. He does not name or even acknowledge whoever owns it now. We sense that his “awkward trespass” is not against those humans anyway, or in any simple way against the wildlife there suffering winter privations that he can turn away from again as he heads home. Perhaps it is a trespass against a time when it was possible to believe that other species could truly seem eternal even as the current inhabitants of those skins struggled against each other and the elements, before the realisation of the Anthropocene and its mass extinction and habitat destruction. It’s a realisation that, maybe, can only become a revelation of true value when we accept that we are owned by the land and by the others we share it with.

“As I blundered along, shoulders hunched, my fingers laced through the holly sprigs for my house, I found something sitting before me on the path: the vixen, quite oblivious to the weather, and to me. Even through pelting snow and half-light her fur lustred. She burned alive.”

The Wood in Winter by John Lewis-Stempel is published by Candlestick Press (2016). The book also features two poems, including Winter Heart by Jackie Kay and Seven Words for Winter by ClimateCultures member Nancy Campbell. Nancy’s seven words for winter include “ukiuuppaa the winter came upon her before she reached home, or finished building her house,” from which I took one of my headings. Part of the purchase price of The Wood in Winter is donated to the Woodland Trust.

John Lewis-Stempel is the author of books such as The Running Hare and The Wood. He is also a farmer, rearing cattle, sheep, pigs and poultry, traditionally. His book The Wood: The Life & Times of Cockshutt Wood, written in diary format, is the story of an English woodland as it changee with the seasons. It is published by Penguin (2018).

You can explore the work of printer and painter Angela Harding at her website, including the many nature and other books she has illustrated or provided cover art for.

Nancy Campbell’s poem Seven Words for Winter appears in her collection, Disko Bay — published by Enitharmon Press (2015). Her latest nonfiction book, Fifty Words for Snow, is published by Elliot & Thompson (2020) and you can read a short reflection on writing the book, with a short extract, in her recent piece for our Creative Showcase.