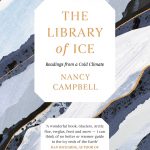 Writer Sally Moss reviews Nancy Campbell’s The Library of Ice: Readings from a Cold Climate. Rich in detail (microscope and dictionary, as much as library) its landscapes, eras, expeditions, personalities and planetary prognoses pile up like brash ice.

Nancy Campbell’s The Library of Ice documents both the realm of ice and humanity’s multifaceted relationship with it.

It was while working for a book and manuscript dealer in London that Campbell came to her decision to tour the ice-related destinations of the world:

“The more archives I catalogued, the more concerned I became about their future readers. Humans had libraries to preserve their fragile records, but the gloomy news headlines put our own survival as a species — and that of the wider world — in doubt.”

A contact of Campbell’s suggested she undertake a residency to concentrate on her own work, and she was persuaded:

“I would find out how other artists were recording this temporal world, and immerse myself in archives that nature itself had devised.”

This direct nature scholarship, and the latent fragility of the ecosystems that support us, are the themes that underpin The Library of Ice’s wandering course. We are presented with manifold landscapes, eras, hubris-driven expeditions, personalities and planetary prognoses, piling up like brash ice.

The poetry of precision

The book is rich in meticulous detail — it’s a microscope and a dictionary, as much as a library. Less familiar words bloom throughout (‘dioptre’, ‘firn’, ‘philtrum’), and it does well to veer only occasionally towards the abstruse. For all the density of scholarship, it’s a readable account, and highly poetic in places.

Vivid imagery is conjured, whether it’s through Campbell’s words (“The [curling] stone makes me think of a child potentate: everyone’s eyes are on it, and its apparently independent movement is cleverly controlled”) or the words of others (Arctic explorer William McKinley: “As I turned round to face the ship, old Karluk seemed to be doing her best to outdo nature. Her deck covering of snow shimmered like tinsel. Every rope and spar was magnified by a fluffy coating of frosted rime”).

The book also internally debates narrative approaches. An example: Robert Boyle was one of the founders of modern chemistry and devoted much of his energy to “the Phaenomena of Cold”. He said of his sources, “to get to the useful matter [the reader] must labour through ‘melancholy Accounts of storms and distresses, and Ice, and Bears, and Foxes'”. Campbell’s response is to smile and admit “My own journals are not free of such accounts”.

But when reading Boyle’s own words I find his personal fascination with his subject far more engaging than his results. And I am anchored and reassured when Campbell shares her rawest perceptions with us. What can be more important for humanity’s prospects right now, I wonder, than examining our subjective responses until we become, one by one, a great deal more self-aware and adaptable?

When it comes to raising the climate alarm, the book is relatively measured: mere whispers of catastrophe punctuate the chapters. But while it may be a myth that a whisper can start an avalanche, several in concert can certainly trigger disquiet.

Campbell reflects in the opening pages that

“When the last of the ice has melted … the records of the past will be the least of our concerns.”

And the Institute for Snow and Avalanche Research, we hear, has predicted that snow cover will disappear from the Alps by 2100, leaving the unprotected glaciers to melt quickly.

In a changing climate, crop and animal husbandry have to change too:

“The flood becomes critical. The waters rise too quickly for [Icelandic] farmers to rescue their sheep. This year, the flock might have been safer up in the hills.”

The Icelandic landscape is regularly used for filming, often because it has the look of an alien planet; Campbell notes that “As the Earth changes, this rocky landscape may hint at humanity’s future, as well as its past”.

And Haukur, one of Campbell’s Icelandic glacier guides, comments that

“Sea-level rise doesn’t worry me so much … I’m more concerned what happens with the tectonic plates. They are going to rise up when the ice melts.”

Against this background, I began to think about the reading process itself, about the pace of life. I read The Library of Ice in snatched quarter-hours on commutes and in queues; reading a book such as this can take time that isn’t always easy to find, or justify, in a frenetic age. There’s the daily grind, which grinds ever harder under neoliberalism, and the fiery panic the climate emergency can induce.

But if a profound book can change a reader’s internal landscape in a matter of days or weeks, then I guess it works fast enough even for 2018. This one slows us down until we can see through the lens of geological time, see in academic detail what is happening to us, and begin to accept and process it. Rapid, society-wide change is certainly needed, but the personal change it rests on requires us to relearn patience.

Talking of the neoliberal grind: we discover that to complete this research and this book, Campbell needed not only the support of a variety of funds and institutions but also a knack for under-consumption of the essentials:

“… I had to live as frugally as I could, which meant moving between house-sits. Sometimes I sofa-surfed for a few nights, or spent the night on a train concourse, or holed up in an airport or bus station toilet cubicle, leaning against the door, ignoring the lock when it was rattled by the cleaner early in the morning.”

It seems that inventorying ecosystems is not yet as lucrative as despoiling them still is. These insights add poignancy to Campbell’s disclosure of her feelings when seeking a base in Greenland for one leg of the journey: “I needed someone who would invite me, tell me I was welcome.”

A possibility of movement?

Through Campbell’s reflections, we encounter a range of perspectives across times and places.

“I understand what has been troubling me about [Edmund A.] Petersen’s paintings: they represent a romantic depiction of the Arctic, from a more innocent time, before icebergs and sea ice had become an indicator of climate change, when convention framed such a view as majestic, rather than temporal or even tragic.”

And in a TV weather forecast in Upernavik, Campbell tells us, “Europe, North America, the rest of the world are off the map, beyond the edges of the screen — out of sight, out of mind” — just as those parts of the world that were ravaged first by climate disruption are often out of mind in Europe and North America. In this journey, she has joined the dots between nations who don’t always recognise their primary interdependence.

Another parallel: for hunters in Qaanaaq, where the ice is retreating, “The changing climate has removed both the possibility of movement, and the promise of rest”. Perhaps we face a corresponding conundrum in the guilty West, with many of us stuck in the chronic busywork of overconsumption yet still lacking a collective sense of the way forward.

Having starkly laid out the current condition of our planetary home, The Library of Ice concludes with an individual act of home-making: Campbell returns from her travels to a new base in the UK.

It strikes me that the book plays it very cool in ending as it does, transporting us to the melting point (and no further) in the settings it explores. This is no bad thing, I think. It leaves us to ponder for ourselves the journey onwards to unbearable temperatures, to drought and death — a journey already completed in the most vulnerably situated countries, and one that many more of us will make, globally, if our nature scholarship is lacking, or if we fail to start living by it in the very near future.

Nancy Campbell is also a ClimateCultures Member. The Library of Ice: Readings from a Cold Climate is published by Simon & Schuster / Scribner UK. Nancy has previously published a poetry collection, Disko Bay, and artists’ books, including The Polar Tombola: A Book of Banished Words and How To Say ‘I Love You’ In Greenlandic: An Arctic Alphabet. She was the UK Canal Laureate 2018. Nancy’s posts for ClimateCultures include The Polar Tombola and A Personal History of the Anthropocene – Three Objects #7.