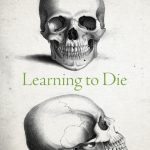 Filmmaker James Murray-White reviews Robert Bringhurst and Jan Zwicky’s Learning to Die: Wisdom in the age of climate crisis — a book urging the cultivation of human virtues in a time of crisis and the rejection of lazy thinking.

This pocket-sized book arrived randomly, appealing to my curiosity with ominous images of two skulls on its cover — with a glowing blurb from Margaret Atwood, speaking of “truth-filled meditations about grace in the face of mortality”. Learning to Die has set my mind on fire, and its moral questioning and truth-telling project will rumble deeply on within me.

The mind of the wild

In three short sections, 100 pages in total, Canadian poet-philosophers Bringhurst and Zwicky take us on a voyage beyond ancestral time, through the story of our planet and the biosphere. It makes use of recent science – for example, the life of the oriental hornet, vespa orientalis, which has a photosynthetic organ: the bright yellow band on its abdomen is the only organism known to man with this – and deep philosophy that skewers any cosiness or lazy thinking we might be deluding ourselves with.

The first section, Robert Bringhurst’s The mind of the wild, is spaciously captivating, inviting us to “let ourselves become enlarged” through ideas and rational truth both forming as poems within the mind. This is unified polymath-eism at its most sparkling, and writing that touches readers deeply because it is spartan in style and speaks to the heart: “The wild, you could say, is a big, self-integrating system whose edges are everywhere and whose centre is nowhere.”

Bringhurst makes some crucial points in the conclusion of this section. “Civil disobedience remains an important political and sociological tactic” – this as popular movements such as Extinction Rebellion are gaining great momentum here in the UK and now around the world, and we are all speaking truth to the corrupt political power that has emerged from our very human-systemic thinking. It is thinking that is not at all eco-systemic, or even engaging with the eco.

In section two, A ship from Delos, Jan Zwicky urges the cultivation of human virtues – awareness, humility, courage, justice, amongst others — to gain the moral virtue needed to face the breakdown that is underway, and that we have caused:

To be aware that death is imminent is not to wallow in despair; it is precisely not that. To be aware is to acknowledge what is the case … Pain must be used to turn the soul toward the real, to reform both action and attention: to love what, in this case, remains.

Zwicky — who suggests that “we attend also to the world’s extraordinary surprise: its refusal to quit, the weed flowering in tar, the way beauty and brokenness so often go together” — challenges us for simply preaching to the converted, and advises that the solution will be found within simplicity, cultivated through these values – be they Socratic, Buddhist, faith-based, or deep ecology focussed:

Thinking like an ecosystem – forms of life are also forms of meaning. When they are lost, meaning is also lost. We actively desire the health of the ecological community to which we belong. We want to do what it takes to be at home.

The final chapter, Afterword: Optimism and Pessimism, is a long and detailed take-down of American academic Steven Pinker’s book Enlightenment Now (2018), in which the esteemed psychologist — who I’ve seen delight crowds across the UK with his finely honed public lectures on living in less violent times — puts forward a new humanistic and technologically-focused salve for thriving rather than survival or extinction. I hope we see Bringhurst and Zwicky debate with Pinker someplace soon!

Learning to die is a book of urgent brevity. I’d love to be buried with this back-pocket volume so that its inherent wisdom and my vegetable body may merge and decompose together, giving back to the ecosystem something of the planet that we have nourished from it.

Learning to Die: Wisdom in the age of climate crisis, by Robert Bringhurst and Jan Zwicky is published by University of Regina Press, Canada (2018).