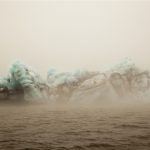 Filmmaker James Murray-White reviews Fire & Ice, an exhibition bringing together three artists who complement each others’ practice in a way that points the audience ‘to deeper connections with the base elements that underpin planetary life and consciousness’.

GroundWork Gallery is dedicated to artwork directly focused on the environment. Previous exhibitions have looked at birdlife, trees, forests and the art of wood, and stone; and their first exhibition featured a specially commissioned piece using River Ouse mud by Richard Long, showing alongside work from his friend Roger Ackling, themed on sunlight and gravity.

It’s an art space that inspires and draws in, and I for one have become a huge fan of GroundWork and its ethos since I encountered it during that first show. Curator Veronica Sekules has created a unique space that brings environment-focused art to us all, from the ground up.

Fire and Ice continues the elemental theme and brings together a mother and daughter with a potter, using still and moving images juxtaposed with pottery to explore how energy is embodied in ice and fire and clay: what it means to humanity, as a thing of beauty and as an object of power, sometimes destructive.

Gina Glover’s still images take the viewer on an arc from the landscapes of Iceland, Greenland and Spitsbergen, showing wonderful glaciers framed as aesthetic, to a series titled Poisoned Water Runs Deep looking at fracking in the United States. The glacial images are in colour, and have an ethereal beauty, as art that we would wish to hang on our walls; and the fracking images — black and white, stark, cropped closely — dominate a whole wall. The controversy over fracking is well known — and we in the UK are seeing it come upon us right now. I’m hearing shocking stories of police and private security guards attacking protestors who are trying to prevent the fracking equipment being set up on land in Lancashire. A friend of mine has been hospitalised after peacefully protesting but being violently pulled and dragged from the public roadway.

Glover’s work makes the damage to the land and atmosphere clear, but it is also the future damage that reveals itself: as one example, fracking taking place on North Dakota farmland, with cows grazing nearby — the animals, the grazed land, the water, and the soil and sky all being irreversibly polluted. This is necessarily political work, and needs to be seen. At an event on using climate change imagery recently, run by the NGO Climate Outreach at the London Reuters Office, I saw a provocative presentation by Canadian photographer; Robert van Waarden has taken this investigation one step further and photographed and interviewed those living on the fracking line as it criss-crosses the US. His images show the human face of this issue: Glover’s work emphasises the environmental issues which this chaotic rush for energy produces.

The experience of these contrasting images close by on the ground floor gallery is stark. They are interspersed with Jessica Raynor’s work: her images and footage present energy in its active form, as tantalising to humans; perhaps like ‘fool’s gold’, ever elusive and drawing us further into its secret. I loved the dynamic dissection in 365 Faces of the Sun: 365 images of the sun flickering before us and drawing us in to its magic and power.

Raynor’s work, she says, comes out of an inquisitive response, “reacting to nature through wonder.” I was also drawn in by her video work Conversion, which shows the burning of a bale of straw, looping backwards and forwards. It represents creation, blooming and death, and her work in total is reminiscent of the best of ideas shaped within the films of Stanley Kubrick

There’s a surprise on the way up to the upstairs gallery, where another of Rayner’s images hangs. The Wood-Pile is a graphite drawing of wood chips, used in the production of biomass. I love the reference to Robert Frost’s poem:

“I thought that only
Someone who lived in turning to fresh tasks
Could so forget his handiwork on which
He spent himself, the labour of his ax,
And leave it there far from a useful fireplace
To warm the frozen swamp as best it could
With the slow smokeless burning of decay”

Upstairs, Hilary Mayo’s pottery dominates the room. As the son of a potter, I’m biased towards this art form, and usually have to be restrained from my inner instinct to reach out and caress clay, as my youth was spent playing with wet and dry and fired clay, the tools and wheels and assorted craft involved in making. I love the way that slip drips down the vessels, marking a lighter territory upon the darker hues seen as landscape through Mayo’s physical vocabulary.

Mayo’s work was made after a trip to Iceland, and follows the contours and colours of that land, encrusted and dipped upon pottery forms, made as vessels. The power of energy bubbling up underneath that land, spewing out in geyser form, spills out onto Mayo’s clay, and represents force and passion, light and dark entwined. Her large-scale piece, Deliquesce sits in the window of the ground floor gallery — or more accurately, squats, like a hewn tree root, powerful and watchful.

Mayo cites an important quote by Walter Benjamin as her influence: “History lies before the eyes of the observer as a petrified, primordial landscape.”

Also upstairs, facing Hilary Mayo’s pottery, Gina Glover shows Melt, a series of 12 circular aerial images of the Greenland ice sheet. GPS references for each image are shown on each. Glover has made an almost perfect artistic record here of the fact of glacial melt, a crucial climatological indicator. Climatologists estimate that were all of this ice to melt, the world’s oceans would rise by approximately 23 feet. Groundworks Gallery, Kings Lynn, and most of East Anglia up to where I write this in Cambridge — the flat fens — would be under water.

The three artists complement each others’ practice within their unique disciplines, and have been brought together in Fire & Ice in a way that points an audience beyond the simple constraints of human understanding to deeper connections with the base elements that underpin planetary life and consciousness. These artworks ridicule human obsessions with energy creation, and connect us to the beauty and deeper power of the raw elements of this planet.

Note: James is an Artist-Associate at GroundWork Gallery. He filmed an event there on 28th October — facilitated by environmentalist Tom Burke OBE — at which the three artists gave presentations about their work. The film will be available on the GroundWork Gallery website soon — and you can see a promotional film James made for the gallery.

You can see more of the exhibition Fire and Ice exhibition – which runs until 16th December 2017 – and the work of GroundWork Gallery at their website. GroundWork has recently won the highly prestigious Nick Reeves Award for Art & Environment, awarded by the Chartered Institute of Water and Environmental Management’s Arts and Environment Network.

You can see work by the individual artists at their sites: Gina Glover, Jessica Rayner and Hilary Mayo. James mentions the work of Canadian photographer Robert Van Waarden.

You can read Robert Frost’s poem The Wood-Pile on The Poetry Foundation website (and I recommend the appropriately themed Fire and Ice).