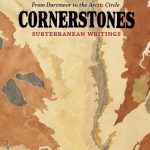 James Murray-White took a break from editing his Finding Blake film to review Cornerstones: subterranean writings. This new collection explores how all landscapes — from Dartmoor to the Arctic Circle — begin below the surface of the earth.

Earlier this year I counted myself blessed, albeit slightly apprehensive, as I was shown into Jordans Mine on Portland in Dorset, by mine manager Mark Godden. I was there to see and film where the slab of Portland stone for the English mystic William Blake’s new ledger stone was cut from. We’ve published much material about Blake’s life and work, his burial site and the process of creating his new stone over at the multi-fabulous Finding Blake project website.

The experience was my first face-to-face encounter with the multiple seams where much of the stone that London is built with (or in the current age, faced with) comes from. This subterranean world, manned only by a few — with huge trucks driving in and out constantly, their lights churning towards and then away from us in the chasms and tunnels — seemed out of this world. And yet, in many ways, it was utterly of the world — an underground engine that takes what is below to build up what is above.

As I reflect upon it, and edit the footage from that day, I’m minded by two other films that deal with underground worlds. Firstly, Michael Madsen’s Into Eternity, which looks at a vast underground series of tunnels that make up a giant nuclear waste dump, and how it is being prepared. The second is Werner Herzog’s paean to our ancestors, The Cave of Forgotten Dreams (also 2010), which delves beyond the actuality of the images in the Chauvet cave in France, which have survived more than 30,000 years, to the wonderful suppositions this visionary filmmaker conjures up.

As the weather up here on the Cumbrian Fells worsens for winter, and the slate on the roof bounces around, I’ve been hunkering down with this deep collection of writings that explore the ground beneath the writers’ feet. Many of the stories in Cornerstones were commissioned for a BBC Radio 3 series, and they all speak to the theme of bedrock. We skim along the tectonic plates with writers such as Sara Maitland, John Burnside, and Tim Dee, all gloriously bunched and slammed together by editor Mark Smalley.

Sara Maitland places a chunk of Lewisian Gneiss in our hands, of about 3 million years in age; sculptor Peter Randall-Page takes us on a tour of Dartmoor tors, and talks of findlings, or orphan boulders; and, in From taiga to tundra — a favourite piece — Daniel Kalder writes of “dead things and diseases and giant holes leaking gas”.

Tim Dee makes it all the more personal in his piece, My rock, about the diagnosis and treatment of his kidney stone. Something of the deep and discursive comes through as he feels deep pain, going on his subterranean journey into the emotions of that, while researching what a kidney stone is, what causes them, and the history of others suffering them, without actually ever seeing this chunk of calcite. He was, for a time, “awaiting granulation by laser, living around a rocky shadow”.

There’s a link here too with Jason Mark’s potent political writing, Fall of the wild. After what sounds like a very hairy journey by plane through the passes surrounding the Yukon River, where the pilot has to navigate into a hamlet to wait out the storm, Mark engages with the First Nations Gwich’in people’s struggle to preserve and hold on to the rock they have ancestrally lived on, the wilderness.

On the borders of change

I’m writing this a few miles from the remains of Hadrian’s Wall, the surviving rock edifice of a collapsed civilisation. I was delighted to read in Sarah Moss’s piece, Whinstone, that “the classical bedrock of English history is as much a thing of flux and mutability as the bedrock of our border”. And her starting and concluding with reflections upon the “firestone far beneath our feet, bubbling and seeping…” is a masterly literary creation.

I once had the pleasure of sharing a sauna with editor Mark Smalley, in the Bristol Lido, and as the heat rose he talked of the passion project he was trying to make happen: a radio programme about the Beer Quarry Caves in Devon, from which Exeter Cathedral was hewn. I’m delighted we’ve both now had these momentous and personally uplifting experiences going below ground and, along with these writers who have patiently observed, recorded and responded to that which holds us, have made material from our subterranean sojourns.

You can hear the four original Cornerstones episodes of the BBC Radio 3 the Essay series on BBC Sounds.

You can read about Michael Madsen’s film Into Eternity (2010) and Werner Herzog’s film The Cave of Forgotten Dreams (also 2010) at Wikipedia.

Do also check out our August 2017 post from ClimateCultures Member Oliver Raymond-Barker, Beyond Tongues: into the Animist Language of Stone. And you can also read Shaped by Stone, a very brief review on my small blog of an essay by Tom Baskeyfield, writing in the new TERRA collection from the Dark Mountain Project. Oliver and Tom are both photographers with impressive portfolios that include Anatomy of Stone and Shaped by Stone respectively.