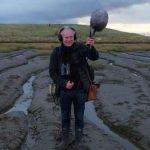 Writer Mark Goldthorpe reviews Into the Wind, a film excursion following naturalist, radio producer and writer Tim Dee as he walks off into the edgelands of East Anglia’s Wash, in search of a pure unmediated, uninterrupted, thousand-mile wind.

In every direction, washed greens, browns and orange-browns stretch into the distance, flattened beneath skies of grey becoming blue. The camera seems to spend half its time on that view and half on the man’s face watching the view: pink from the cold wind, rounded and soft where the land and sky are flat and severe, it’s a face alive with questions of a place that seems without obvious answers. Tim Dee, naturalist, radio producer and writer, has eyes that seem to pierce the distances beyond the wide horizon. He’s trying to see the thing he’s come to listen to: an unmediated, uninterrupted, thousand-mile wind.

Dee spots his destination, a long mound in the distance. The only thing of height for miles around, “it’s the place I imagine capturing a pure Wash wind”. He strides off, satchel of recording equipment at his hip, covered microphone held aloft; he refers to it as his equivalent of a pilgrim’s staff or dowser’s rod, but it more resembles a giant, furry grey caterpillar on a stick, or an outsize candyfloss gone badly wrong. The large headphones suggest that his ears must be the only part of his head that might even remember warmth. As he walks, the camera following a little shakily, we see he’s moving along a bank through the flatlands, passing above deep channels of water that cut through the grasses. The only trees are bare and strung out in thin lines, parceling off squares of naked brown soil: fields where there had been sea.

52.9167°N, 0.2500°E: The Wash, reclaimed sea-land between Lincolnshire and Norfolk. A “questionable shore,” as Dee names this place he first encountered as a teenager: “a great place to meet the sea, because the sea was permanently meeting the land and both seemed unresolved about the status of each.” It’s a constructed, “brokered edge, made by banks and reclamation.” The camera frames the curve of the bank and its watery ditch, the angle where it turns a sharp corner of yellowing grasses and heads off into the distance. On a mission to contain, to control.

Walking in such a wide land, usually alone, he says that what draws him on “is a sort of oblivion … a kind of dissolve into a landscape. It takes the bigness of ‘self’ and dissolves it.” Now, he is silhouetted in the middle distance, facing down a soft slope into the emptiness, binoculars held up to his eyes, microphone slung behind him, pointing up to the sky.

Dee, used to striving for the near elimination of wind noise in the voice recordings he produces for radio – the “wild track” that distracts and subtracts from the desired audio focus – is now on a quest to capture the sound of the wind itself, on its own terms: “wind as wind might sound in its own ear.” But it’s hard to capture because, “in some ways, it doesn’t exist as a sound. What we think of as the wind is the sound that the wind is making as it rubs over the surface of the world”. We hear grasses, sea, trees, not the moving air itself.

He imagines a future life – his retirement life, but perhaps also one beyond that finite horizon? – of listening only to his tapes of the wind, the human voices all forgotten, when “it’s the turn of the really big voices to have their say.” Wild track is the thing.

Returning to the here and now and the visual, lying on the slope of the bank, he watches the infinite, uncontainable sky. “This is what the surface of the Earth sees. The wind is visible, the way the clouds are moving.”

And then, alarmingly, we’re into his memory of the time “when the wind first came to call on me.” Again, when he was a teenager, but this time cycling the Clifton Suspension Bridge across the Avon Gorge, delivering the evening newspapers. The only other person in sight, a stranger walking ahead of him through the dark November afternoon, looked back once to catch the approaching boy’s eye – and then stepped up onto the parapet and into the wind tunnel of the gorge, to be held up by nothing for just one instant. Dee catches our eye briefly too as he tells us this and, a moment later, we see a bird of prey hovering above the field behind him, hunting. “But because he wasn’t a bird, he didn’t stop.” We’re left to wonder what the approaching Earth saw then, looking up as a man proved to the air that he wasn’t a bird. It was a cruel sight to force onto a teenager on his afternoon paper round.

“But that was a wind story to me, because it proved to me in some ways that the air, as pushed through that gorge, was a place simply that we couldn’t go, that wasn’t ours for entering or mastering in any way. And yet the birds were falling and rising in that wind. It’s their place, not ours.”

There are deep furrows in the marsh as he progresses from the fresh to the salt, walking now beneath the level of the manmade bank, into mud and marshgrass and the footprints of geese. The mound is close, standing like an ancient long barrow, but Dee pierces the myth even as he makes it, revealing this as a failed freshwater reservoir. But perhaps, I think, that will stand just as long as our other relics have done – and then remember that the sea probably has other plans, even for a place that’s been taking land from it for centuries. A storm light hovers over the horizon.

Where everything is kept in motion

Now he is climbing at last onto the mound, the highest ground for as far as we can see. Coming up behind, the camera frames him against the reveal of a vast plain of mud. Brown and grey shoreland almost up to the horizon, broken by silver threads of water reaching out to a sea that is still impossibly far off. After the wind stories and the brokered edge, this is landscape from a Tarkovsky film: a zone of suspended reality, flickering back and forth between something clearly natural and something somehow other. A highly questionable shore.

“I feel closer to the wind than I’ve been before.” He’s holding his wind-dowser’s rod ahead of him. “You feel it coming straight at you, from who knows where, out to the north.”

Now we hear it too, what he came for: a pure wind, washed off the sea, fresh from its own creation and untouched by the vast distances it’s travelled already. “Like it hasn’t stopped for anything yet. I’m probably the first thing this wind has hit for about a thousand miles, and it’s telling me so.”

At this point he chuckles into the cold, fast air and I wonder what else he’s hearing in it. He looks like he’s left the ordinary world for a moment. “I don’t hear the sea and I don’t hear the grass, and the mud is quiet. It’s a bird wind; when you are in it and it’s blowing you around, but it’s not sounding like anything other than itself. Which is what you are, as well. I sometimes think if the dead go anywhere, they go into the wind. That’s where everything that was is kept in motion, blowing and going. All the birds and all the people.”

The wind rumbles on. He stands there a moment longer, then descends to step a few footprints into the mud and kneel with his pilgrim’s staff before him. His clothes and headphone-headdress as dark as the mud, his hair as grey as the sky, he is an ancient seer, a discerner of wild track, reaching forward to hear beyond the horizons.

Into the wind – a film by Richard Alwyn and Tim Dee, was originally shown on BBC Four on 12th April 2017 (and no doubt will become a staple repeat). It was made by Wingspan Productions.

Mark quoted from Tim Dee’s writing on a pair of mythical Norse ravens, Hugin and Munin, in his previous post: Interstices of Things Ajar.