“Both books speak to my ongoing need for connection and intra-veloping with the growing world. They explore how I experience what I breathe, how water, soil and grasses unfold from me and I from them.”

In melt and the hispering, Sarah Hymas encourages us to rethink, blur, mix up, remake the stories we’ve been told. 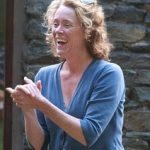 Sarah Hymas is a poet, performer and artistbook maker focusing on the sea, its ecosystems and its interdependence with people, and the impacts of climate change and pollution.

In the first lockdown of 2020 I was one of many writers wondering how publishing a book was going to work in a pandemic. melt was originally due to be published in the spring of 2020. Eventually appearing in December, it is the outcome of four years of reading, living and writing around my encounters with the ocean, its currents, ice melt, plastic debris and many other of its upwellings. the hispering, by contrast, popped out over four weeks in April / May 2020. Rising from a thirty-year-old experience, it demanded my attention during the world’s rupture, an almost obsessive revisiting, retracing and retelling of what had happened to my twentysomething-year-old self in West Sussex, Donegal and some strange netherbridge strung between the two.

In part the books seem quite different: one poetry, exploring how line, space and image can fold and unfold across oceanic movement; the other a pamphlet of prose-poetry-like glimpses of a dreamt / dream-like meadow. Still, they both speak to my ongoing need for connection and intra-veloping with the growing world. They explore how I experience what I breathe, how water, soil and grasses unfold from me and I from them. Both books play with folklore, social history, a desire for belonging, a fear of disconnection and strive to embrace what is unknown or weird or threatening with an open spirit.

They both play with form, restless in the flat page conventions of a book. As a maker of artistbooks I’ve been playing with how text can break from the dimensions of a page, how it can stretch across pages, and how pages and folds can ask unexpected things from readers. Both books ask for reciprocity: between book as object and reader as subject, or vice versa.

They reflect a life-long fascination with how imagination upholds our worlds, how what we dream, in waking or in sleep, feeds and enriches thinking, doing, seeing. I’d hope that anyone who opens their pages also finds new worlds opening up to them, within and without of themselves; and is encouraged to rethink the stories they’ve been told over the years: the true and imagined ones, the scientific and historical ones, the personal and collective ones, and to remake them, to blur them a bit, mix them up and shake out new possibilities for what might be to come.

More about the processes and obsessions that informed melt and the hispering can be found at Sarah Hymas – writer and maker.

“Now you must be careful. The Wicked Weather of the West is a cunning shapeshifter.”

Quentin D. Young‘s comic-book, The Wizard of O2 re-imagines the classic tale to bring us back to the Land of Oz for a 21st-century adventure in science and magic, creating space for humor and hope in the face of climate catastrophe.

Scarecrow: “Now you must be careful. The Wicked Weather of the West is a cunning shapeshifter. For me, she came in the form of a drought. Dried out the crops and put me out of a job!”

Lion: “For me, she was a fiery heatwave that killed the little animals. All the yummy ones too. Now I’m a starving performer, and Scarecrow uses the money to buy cat food!”

Dolores: “What about Tin Man? Where’s he?” 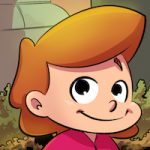 Quentin Young is a writer, climate communicator and emerging comic creator working creatively as a storyteller with the aim of reaching mainstream audiences on the issue of climate change.

What if Dorothy’s twister was a wormhole, and the Land of Oz was another planet? What would ‘Planet Oz’ be like today? And why on earth is it running out of oxygen?

These are some of the what-if questions I worked with when I wrote The Wizard of O2, a re-imagining of the classic tale that brings kids and grown-ups back to the Land of Oz for a 21st-century adventure in science and magic.

As with any retelling, I needed a reason to revisit the Land of Oz (other than my own fandom since discovering Judy Garland’s 1939 movie as a kid): Why tell the tale again, and why do it now? L. Frank Baum’s original novel was published back in 1900 and, more than a century later, the book has entered the public domain. The world has also changed a great deal. I realized the time was right to not only revisit the material but to do it through an environmental lens that would make the story even more pertinent in our current, climate-changed times.

Because I come from a screenwriting background, the project began as a screenplay for an animated short film, which I wrote ‘on spec’ to later pitch to film studios and production companies. I envisioned a charming animation with cute and colorful artwork worthy of a Pixar movie, and the climate narrative behind it would function by, first, connecting with audiences through an affectionate parody of Baum’s much-loved work. If the aim of the project is to get mainstream audiences thinking about something as depressing and anxiety-inducing as global warming, I wanted to make it easy for them to go there. I wanted to engage them on the issue by making it familiar, entertaining and, yes, ‘fun’.

On discovering the prohibitive cost of making an animation and the scarcity of producers willing to back an animated short, I opted to adapt my Oz satire into a comic book first. A comic was something I could manage myself while remaining in the pop-cultural category of mediums, which also includes television shows and video games. This was a parameter I had set for the project because, given the climate cause, I wanted the story to have ‘reach’. The visual medium of comics would also convey a brand of charm and whimsy that I thought was crucial to this project.

As many have said, climate stories don’t all need to be apocalyptic dystopias filled with doom and gloom. There’s a place for dark and gritty perspectives and, indeed, there are many climate storytellers producing valuable work in this space. But there’s also a place for whimsy, humor and hope, even in the face of climate catastrophe. Taking the lighter approach can actually help mainstream audiences, which includes both children and adults, to connect with an otherwise depressing subject. So, with the Oz story as my vehicle, I embraced comedy and eccentricity as a route into the hearts and minds of my readers.

My hope for The Wizard of O2 is that it reaches many people as a form of popular entertainment and, thereby, brings the climate cause to a new and wider audience. The comic is now published under my imprint, Truth/Dare Media: We’re a publishing startup that focuses on telling important stories through comics, audiobooks and other popular mediums. And our mission is simple: To help save the world through pop culture. If you enjoy our book and agree that it contributes toward this cause, please help us spread the word!

The Wizard of O2 is a single-issue comic book of 32 color pages. It is written and lettered by Quentin D. Young, an emerging comic creator and a represented script writer whose screenplays have been accepted for submission by leading Hollywood companies including Walt Disney Studios, 20th Century Studios (formerly Fox), and Participant Media. The artwork is by Jean Lins, a comic book artist whose previous works include Dandara and Tales of Griot: The Mirror of Truth.

The Wizard of O2 is published as an indie comic by Truth/Dare Media (January 2021). It is currently available as a digital comic and can be purchased directly from the publisher, or through major online bookstores including Amazon, Apple Books, Kobo and Google Play. It has also been released on Comixology, an Amazon platform dedicated to digital comics and the world’s largest comic readership. The price is $2.99 or £2.49, though this may vary slightly between outlets.