“You know, Tiny, it was sentiments like that that caused all the problems in the first place.”

In her climate thriller, Brit Griffin‘s future dystopia is a crucible for our moral choices today: how to find our way to be a better species in a world that’s already changed is a path of the imagination.

“You know, Tiny, it was sentiments like that that caused all the problems in the first place.”

“What the fuck are you talking about?”

“Things people would kill for. Chocolate. Cinnamon. Beaver pelts. Oil. You name it, buddy, someone says those words and then it’s mayhem.” 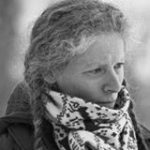 Brit Griffin is author of three near-future cli-fi novels and a writer of poetic/story musings, whose interests lay in reconciling with non-humans and exploring the human/creature boundaries.

It seems we are a species of excess. Appetites? Endless. Whether we are stacking buffalo skulls along the railway or the towering shelves at Amazon, it is the same human itch to want more. It might just be who we are — but I think many of us would rather not be quite so rapacious in our need and greed. So this is the moral conundrum I always return to in my writing: why do some people do the right thing, behave properly in the sense that they share, act with restraint and respect, consider others (both human and non-human), and other people do not?

I started working on the Wintermen series ten years ago. At that time, I was interested in dystopic scenarios because they act like a crucible in which we can explore the kind of moral choices and actions I am interested in. There are many literary crucibles out there to chose from: zombie invasions, natural catastrophes, fascism. At the time, I had a growing interest in climate change and the measures we needed to take as a species to avoid catastrophe.

So climate change became my crucible, and the Wintermen trilogy a means to discuss and ponder our relationship with the environment. At the time, my perpetual winter scenario seemed like a good frame for a book that explores ordinary people struggling with the aftermath of on-going climate disruption, breakdown and scarcity.

By the time I was working on Wintermen III: At the End of the World, it was clear that there was nothing speculative about a climate change scenario. The present, transformed into some sort of liminal space — the future concocted by the past leaving the here-and-now the odd man out. Existing in the present means we cannot re-write the future script, only make small but important edits to it. No rolling back the clock. Urgent mitigation only, no prevention. So in At the End of the World I wanted to think about simply behaving properly in its own right, not to save ourselves and our ‘way of life’, but to transform ourselves for a different way of being human.

In the liminal space of the story the question shifts from how do we prevent climate change to how do we find our way to be a better species in a world that has already changed? How do we begin to reintegrate ourselves back into the natural web, where can we look for the wisdom to guide us on the path away from desire towards ordinary, in situ joy?

This path, I think, is one of the imagination as much as lifestyle changes or the development of new and gentler technologies. Returning to those liminal spaces, the book begins to explore and chip away at the hard boundaries between what is and what should have been, reality and dream, science and magic — this is an area of exploration I will continue to wander in, looking for the signposts left by birch and wolf and wiser humans than myself about how our species can find our way home.

The Wintermen III: At the End of the World by Brit Griffin is published by Latitude 46 (October, 2020) and can be ordered direct from them as a print book or an ebook, from Chapters (Canada) or from your local, independent bookseller.

And you can hear a great chat about nature, winter and climate change with Brit Griffin and Algonquin Anishinaabe writer from the Timiskaming First Nation, Karen McBride (author of Crow Winter, 2019).