“I see this as an anti-camera, one that does not strive for resolution and clarity … but instead seeks to capture the essence of place whilst also providing sanctuary for the artist.”

Martin Barnes: ‘Raymond-Barker’s photographs function as the opposite of photographic journalism for he knows that conventional visual description does not allow for the evocative and lingering impact he seeks. His subject is the atmosphere of the place, its spiritual history across time, and an uneasy combination of awe in nature with the nascent threat of an unfathomable destructive force’.

Nick Hunt: ‘He wanders enraptured, ruptured. The sunlight breaks upon him. On the shore he falls to his knees with the immensity and stares upon the awesome light that floods the shadows of the world. The god of love is everywhere. It is all a marvel. He closes his dazzled eyes and the world appears in negative, the black sky and the white trees, the incandescent veins of leaves, the bleached water opening to some great revelation’.

Oliver Raymond-Barker is an artist using photography in its broadest sense – analogue and digital process, natural materials and camera-less methods of image-making – to explore our relationship to nature.

Trinity is a journey into landscape. It explores the complex layers of narrative embedded in the fabric of the land and engages with histories of spirituality, protest and control.

I made the work during residencies at Cove Park Arts on the Rosneath Peninsula in Scotland. The images originate from 20 x 24-inch paper negatives, exposed in a custom-built ‘backpack’ camera obscura — a tent-like structure designed to allow creation of large format images in remote locations. I see this as an anti-camera, one that does not strive for the resolution and clarity of traditional photo-mechanical devices but instead seeks to capture the essence of place whilst also providing sanctuary for the artist.

From early Christian pilgrims who voyaged to remote corners of the British Isles such as Rosneath during Roman times, to its current occupation as home of the UK’s nuclear deterrent Trident, this remote peninsula has been the site of diverse histories.

Amongst these is the story of St. Modan, the son of an Irish chieftain who in the 6th century renounced his position as an abbot to live as a hermit. He journeyed to this remote peninsula in search of sanctuary and sought to use the elemental power of nature as a means of gaining spiritual enlightenment.

Today, however, the peninsula is dominated by the presence of military bases HMNB Faslane and RNAD Coulport, the home of the UK’s nuclear deterrent Trident. Existing alongside these sprawling sites are the small, temporary constructions of itinerant activists protesting against the military presence — locations such as the Peace Wood bear traces of their occupation.

The project weaves together these disparate yet interconnected threads, to form an immersive body of work, made on the boundaries of the photographic medium. 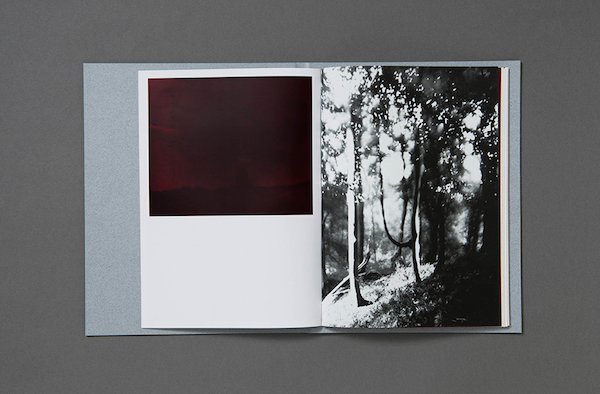 ‘I walk through the darkness. The heavy straps of the pack bite into my shoulders, fine rain enveloping me as my head torch illuminates a tunnel through the gloom. Miles pass this way.

In the half light I weave an uneven path down to the shoreline. The slow process of unpacking and setting up is akin to a conversation with an old friend. As my body goes through the motions of pitching the camera the light is rising and the tide approaching.

I crawl into the dark void of the structure, leaving my damp boots and previous self behind. My senses become attuned to the new darkness. I reach up and pull back the crude shutter: the structure is flooded with light and the image begins to resolve itself.

All energy expended, my whole process, pivots around these precious seconds when light fuses time onto the latent canvas before me.

I stretch up and close the shutter, stowing the paper away in the now resounding darkness. Unnoticed in my reverie, the water has begun to lap at the edges of the tent. I swiftly pack up, my body and mind already occupying a new space, treading a path towards the next moment…’

Trinity (Loose Joints Publishing, 2021) is available for pre-order now, and will be published in December 2021 in a handmade edition of 200 copies: 68pp, 250 × 350 mm, with 35 photos and texts by Martin Barnes and Nick Hunt. Printed hardcover with black boards, comprising two stitched booklets with images and texts on six different papers.

You can read Beneath What Is Visible, A Vast Shadow, Oliver’s ClimateCultures post about the creation of Trinity, with extracts from the texts and some of his images.