“The snow lay in waist-high drifts, and kept falling. I’d gone to Iceland to write about snow, but I found that snow had other ideas…”

Nancy Campbell‘s new book, Fifty Words for Snow, reflects on snow’s role in cultures around the world and the importance of linguistic and cultural diversity in a rapidly changing world.

Taoist philosophy suggests that when there’s an abundance of any natural matter, a life will come forth from it: the river will create its own fish when the water is deep enough and the forest will produce birds when the trees are dense enough. And so it follows that that a woman may be generated in the heart of a snowdrift. 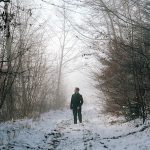 Nancy Campbell is a writer and book artist interested in polar regions and water conservation, winning the Royal Geographical Society’s 2020 Ness Award for her research with Arctic and Scandinavian museums.

A few winters ago I rented a former Salvation Army meeting house in the north of Iceland for a few months. Since the snows of Siglufjörður don’t usually melt until April, I soon learned how the inhabitants of this small fishing town distinguish themselves from their neighbours in Ólafsfjörður, another small fishing town beyond the mountains. Folk in Ólafsfjörður do not clear the snow from the paths leading to their homes. In Siglufjörður the sweeping of snow is a social duty. I lived alone, and it was some distance from my front door to the road; the snow lay in waist-high drifts, and kept falling. I’d gone to Iceland to write about snow, but I found that snow had other ideas — it wanted me to do some physical labour. In his poem ‘Digging’, Seamus Heaney describes how his trade differs from that of his ancestors: ‘I’ve no spade to follow men like them,’ he writes, using instead a ‘squat pen’. Now I had to put down my pen and borrow a shovel from my elderly neighbour Kristján. Then, of course, I cleared his path too.

Fifty Words for Snow is a journey to discover snow in cultures around the world through different languages. The climate is a prism through which to view the human world — just as language can be. Inevitably, a book about climate also looks forward, considering what we miss, as every winter many countries see fewer snowflakes, and some years now, none at all. Just as the ecosystem is changing, so are the languages that describe it and the way they are understood. When I began to learn Greenlandic in 2010 I discovered the fallacy of the many ‘Eskimo words for snow’, a popular concept that was dismissed by linguists in the 1980s. More pertinently, that same year Greenlandic was added to the UNESCO Atlas of the World’s Languages in Danger. While many of the languages in this book, such as Spanish and Urdu, can be heard spoken around the globe, others, such as the Inupiaq dialect of Wales, Alaska, are remembered mainly by elders in relatively small communities.

I started to write this book in September 2019 amid debates about Brexit and the climate crisis, while attending Fridays for Future marches in Germany. I finished it six months later, a week before gathering with other masked and silent Black Lives Matter protestors in the UK. The process of tracing a single theme across many languages new to me seemed a powerful way to overcome the borders that were going up around the world. Ironically, one of the first entries I researched concerned the photograph of boys in a snowball fight taken by Robert Capa in war-torn Hankou (modern-day Wuhan) in 1938. Within weeks, the location had become infamous for the outbreak of COVID-19. Even under lockdown in a pandemic, it was still possible to voyage around the world through dictionaries.

A snow crystal is part of the endless cycle of the water molecule: from its six-cornered solid state it becomes liquid and then gas, and thus a snowflake that falls on the glaciers of the Rwenzori peaks in Africa might melt and evaporate and later freeze again and fall in the apple orchards of Kashmir, and melt again and fall fifty times and more. Just so, a single unit of meaning — one word for snow — offers an approach to new places, a clear path of understanding to travel forwards along.

Fifty Words for Snow by Nancy Campbell is published by Elliott & Thompson (November 2020), richly illustrated with William Bentley’s early photographs of snow crystals. It is available from Hive or from your favourite independent bookshop