“Unaware of last night’s events, the next day our friends resume their journey. Once again, the powerful ocean currents drag them ever southwards…”

In Alan Hesse‘s comic book, Pole to Pole, Captain Polo leaves his disrupted Arctic home, seeking better hunting grounds. Unbeknown to him, he has onboard a mysterious stowaway with his own agenda. 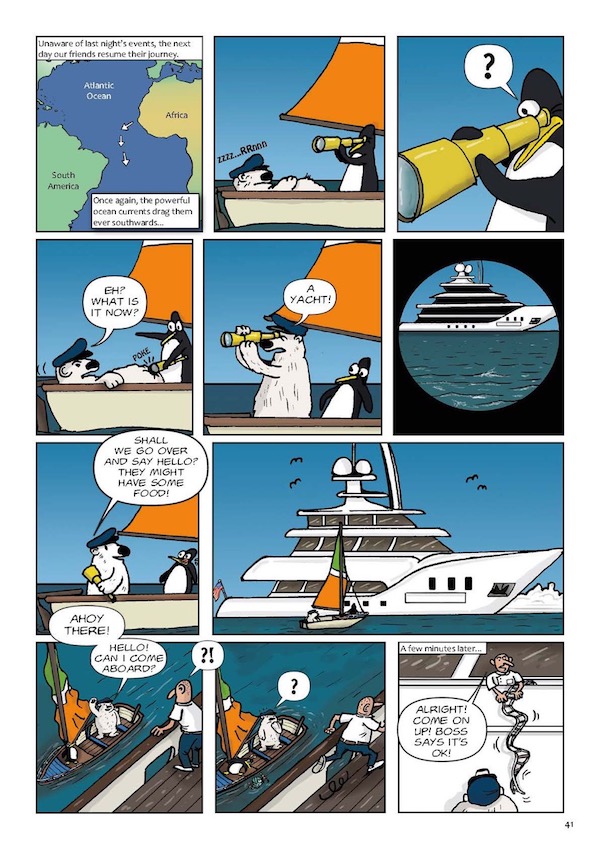 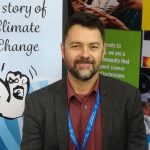 Alan Hesse is an author-illustrator, educator and conservation biologist inspired by nature’s majesty and fragility and the need to protect it and who believes that education should be fun.

Pole to Pole is Book 4 in my series of graphic novels about climate change, but it can be read as a stand-alone book as well. In Pole to Pole, Captain Polo the climate change bear (main character) once again leaves his ecologically and climatically disrupted Arctic home in search of better hunting grounds. Unbeknown to him, he has on board his trusty little sailing boat a mysterious stowaway with his own agenda, and before he knows it Captain Polo finds himself on another rollicking adventure in which he unwillingly travels far to the south, visiting different locations and meeting all sorts of colourful characters.

Through each encounter, Captain Polo sheds light on different, sometimes little-known aspects of climate change effects and also solutions. Thus we learn about the effects of permafrost melt in Siberia, how warming temperatures are undermining the Sámi reindeer people and the Christmas tourist industry in Finland, and what the mysterious scientists locked into Iceland’s Hellisheidi Carbon Fixing Plant are all about. Captain Polo has an opportunity to explain the difference between climate and weather to a refreshingly open-minded climate denier he meets in Ireland, and he later gets interviewed by a climate-conscious reporter on Senegalese national television.

Polo’s final encounter is with multi-billionaire oilman and arch-villain Tex Greedyman, a meeting that quickly turns sour as our hero shares his views on fossil fuels and renewable energy in his characteristically blunt manner, a conversation that lands him trussed up in the hold of Greedyman’s luxury yacht, destined to be sold to a circus at their next port of call…

The idea behind all of my Captain Polo books is to deliver factual, up to date key information on climate change effects and solutions around the world in a novel, engaging format that draws upon the elements of fiction and storytelling to facilitate understanding as well as provide pure entertainment. The result is my 4-book series of Captain Polo’s adventures, non-fiction graphic novels targeting 9-12-year-old kids but actually also enjoyable and informative for adults. I decided to write graphic novels about this topic when I realized, about four years ago, that I actually knew very little about climate change. The news at the time was largely confusing, and certainly overwhelming. I decided that the best way for me to gain a clear understanding of different aspects of climate change, and crucially also help others to do likewise — especially children — was to create a graphic novel about it.

Climate change has become a multi-faceted topic that touches upon all sectors of society, industry and even culture. I dedicate my series of graphic novels to gradually explore these aspects, overturning one rock at a time to uncover the basic facts, in the hope of helping my readers increase their environmental and climate awareness, understanding of key terms and concepts, and above all feel a little more empowered on how to deal with it all. As such all the Captain Polo books hold positive messages, actionable, concrete tips on how we can all make a difference to protect and restore our natural environment.

Pole to Pole will be available in print and ebook. It will also be available in black and white, as a paperback colouring book. This is an experiment and will have a separate listing (which I haven’t set up yet); I’ve never done anything like that before and I’ve never seen a colouring comic book, but given the detailed images and the textual / non-fiction content (the same as in the regular book) I am betting that colouring in this comic book may well have as much educational impact as reading it, if not more!

Pole to Pole is available now on preorder and will be released on February 27th, International Polar Bear Day.