“I always feel uneasy placing the self at the centre of a piece – the planet doesn’t and shouldn’t care a jot about my own views.”

Julian Bishop‘s poem asks how would the climate feel being messed around in this way – drawing on myths of an evil fairy child substituted for a human baby. 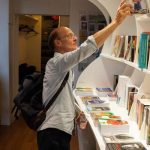 Julian Bishop is a former journalist, environment reporter and tv news editor who writes poetry about eco issues and was runner-up in the 2018 Ginkgo Poetry Prize.

One challenge I consistently come up against as an eco-poet is the use of the first-person ‘I’. Given man is entirely responsible for our predicament, I always feel uneasy placing the self at the centre of a piece – the planet doesn’t and shouldn’t care a jot about my own views.

Coupled to and at odds with this dilemma is the lack of voice for any of the creatures and geographies impacted by our recklessness. Some of the most powerful poetry I’ve read tries to give a voice to the voiceless, e.g. Sue Riley’s fabulous winner of the Ginkgo Prize a couple of years ago, ‘A Polar Bear In Norilsk’. Nobel Prize winner Louise Gluck also writes a nice line from the point of view of plants and inanimate objects, e.g. ‘The Red Poppy’.

My biggest influence though is Alice Oswald, whose 2017 Griffin Prize-winning collection Falling Awake is written almost entirely in the ‘divorced first person’. Oswald shapeshifts changeling-like into dew at dawn (‘A Rushed Account Of The Dew’), a dead body (‘Body’), a shadow (‘Shadow’) and Orpheus’s head floating in a river (‘Severed Head Floating Downriver’). I immersed myself (excuse the pun) in her book before writing ‘Changeling’ to try and decouple from the ego – how would the climate feel being messed around in this way?

Which brings me to the poem itself, which was actually born out of a workshop exploring myth and fairy tales. During a bizarre discussion on types of fae, the changeling cropped up and immediately screamed POEM! at me before vanishing up a chimney flue (that’s what they do best, apparently). Of course the link to climate change was obvious and I began imagining how I could personify it in changeling form.

According to the myth, the changeling is an evil fairy child substituted for a human baby just after birth. Putting a changeling in a fire would cause it to jump up the chimney and return the human child – tales of ways to uncover the true identity of changelings vary from country to country but all were horribly cruel.

I decided to give my ‘climate changeling’ plenty of ugly features –

and the chimney flue obviously beckoned for the end of the poem which ensured an unintentionally apocalyptic end. This wasn’t quite the note I hoped to end on but as so often the poem knows where it’s going better than the poet. I can only hope it’s wrong.

I hadn’t heard about Green Ink Poetry until I came across a call-out on Twitter for poems for an issue on Pyres. It’s a two-year-old press with high production values. I looked at their website which has the strapline “We welcome chaos, calamity and the natural world”. My ‘Changeling’ appeared to have found a home.

You can read Julian’s poem Changeling at Green Ink Poetry – and do explore more of his poems and reflections on his experiences of recent times in the pandemic in his On Green Verges, contribution to our special Quarantine Connection series, in September 2020. You can follow Julian on Twitter: @julianbpoet.

Julian mentions Sue Riley’s ‘A Polar Bear In Norilsk‘, which you can find in the free Ecopoetry Anthology from the 2019 Gingko Prize. And Louise Gluck’s ‘The Red Poppy‘ was published as The Guardian’s poem of the week (23/8/2021). Alice Oswald’s collection Falling Awake is published by Penguin, and you can read a poem from it at the link.