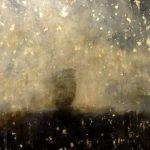 A visual artist whose paintings using tar explore how our never-ending pursuit of materialism and wealth and corresponding quest to dominate ‘savage’ will be our undoing.

Although trained in writing and literature, I have been working as a visual artist for the last ten years. Since 2015, I have been making paintings using tar as my primary medium.

One such series, titled LOOMINGS after the first chapter of Moby-Dick, is intended to evoke what Herman Melville saw prophetically in the 1850s: that our industrial history, our never-ending pursuit of materialism and wealth and our corresponding quest to dominate ‘savage nature’ will be our undoing. The paintings, like Melville’s book, are also about the confrontation of our own ignorance, our melancholy quest for knowledge, reality, and enlightenment in an unknowable universe.

I have a second tar series titled ‘Nature Morte,’ which is the French term for still life, in which I depict flowers and various other flora and fauna in a way that makes them appear to be suspended in a liquid darkness.

I have participated in two US-based group shows relating to climate change, ‘Environmental Impact 2’ and ‘Extraction.’ I am very interested in finding collaborators of any stripe, in similar and disparate media.