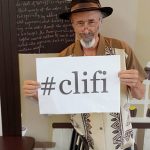 A ‘climate activist of the literary kind,’ promoting climate activist ideas, novels and movies. Motto: “Curious, empathetic, compassionate: What we should be as human beings.”

When people ask me what I do I like to say I’m a ‘climate activist of the literary kind.’ Let me explain.

I’m not a novelist, and I’m not writing any books about climate change. But since 2011, I’ve been working 24/7, no days off from my PR computer in years, to promote climate activist ideas, novels and movies, free of charge. I don’t charge anyone any fees, and I’m not in this for personal fame or money. I’m a promoter. It’s my hobby, after retiring from a long and zigzagging career with newspapers in Washington, Alaska, Japan and Taiwan.

My most important work so far has been to help promote a new literary term, ‘cli-fi,’ in 2011 and then to boost its popularity in the media as a headline term and an actual literary genre, different and separate from sci-fi. The new coinage borrows the assonance and rhyming sounds from the sci-fi term.

To get where I am today, I used my PR know-how to ‘plant’ major media articles about cli-fi in The New York Times in 2014 and later in The Guardian in London, the Associated Press, Reuters, and hundreds of media outlets worldwide. Based in a small office in my home, I reach the world with pixels. I don’t use the phone. I don’t have a phone. I don’t make any calls.

I’m a PR gadfly, on the fly. And I’ve never been so personally energized, although I need to underline that this is a very serious doomsaying business.

This is all I do all day, every day. I’m 70. A happily retired journalist, I now curate a global media website called ‘The Cli-Fi Report’ (www.cli-fi.net) and tweet around the clock to other climate activists and literary people worldwide seven days a week. I eat, breathe and sleep cli-fi and go to sleep at night not tired or exhausted but fulfilled and exhilarated. I wake up every morning full of energy and new ideas.

And I don’t make a dime from any of this. I’m paying it forward. Life’s been good to me. I don’t have much time left and in many ways I’m living on borrowed time. There was a near-fatal plane crash in Alaska in 1983, a heart attack in 2009 (with a tiny steel mesh stent keeping my ticker ticking). Monthly social security checks from the U.S. Government are my only income now, and they’re just $300 per check. I live a simple life, far from the large cities of the world.

And nobody’s ever heard of me. I like it this way.

Someone once said that with the success of my climate PR work, I’m ‘a force of nature.’ No, I’m not. I’m a ‘servant’ of nature. I’m doing this work for the world, not for me. I never put myself at the center of things.

I also never studied PR. But hanging around newspapers and newspaper people since my college days, I learned how PR works, what makes a good eye-catching press release, and how to gently pitch and approach editors and reporters. My work as ‘a climate activist of the literary kind’ is the most important thing I’ve ever done.

My education: I’m a 1971 graduate of Tufts University in Boston where majored in literary theory.

My motto: “Curious, empathetic, compassionate: What we should be as human beings.”