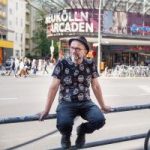 A writer, musician and photographer, with a regular column on climate change, whose novel, New Clone City (2018), features environmental themes in an urban setting.

I’m an Anglo-Berliner, originally from Portland, England. I write a regular column, primarily on climate change and related themes, for the online literary and political magazine The Wild Word, as well as journalistic pieces for international publications such as ZMag, Green Left Weekly and Huffington Post.

My first novel – New Clone City – was published this year, and, although its setting is very definitely urban, environmental themes play a significant role. I am also very proud to have had a piece included in the recent Terra edition of Dark Mountain.

In addition to writing, I’m also a freelance musician and photographer, and use Twitter a lot (@schnappz) to promote environmental issues.

27th June 2019
Writer and photographer Mike Hembury spent a week on an Inner Hebridean sailing trip as part of Sail Britain's multidisciplinary Coastline Project. He recalls this small group's ecological encounters and shares poems and photographs they inspired in him. Read More

12th December 2018
Writer and photographer Mike Hembury read Deborah Tomkins’ post on how grief and hope feature in the work of fellow 'climate writers', and shares a poem in response to his own research into these experiences under climate change. Read More
Website
Mike Hembury
Website
Soapbox at The Wild Word
Twitter
@schnappz