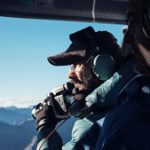 A photographer exploring forced migration and where will we go, as a species, when we can no longer inhabit lands we have since our beginnings.

I am interested in the forced migration of people, both on small and large scales, due to economic, social, political or environmental events. Whatever the scale of the event from the outside, those affected by them experience them as life-changing.

The power of humankind to radically change the lives of others of their kind, often for the worse, is played out in these situations with the quiet menace of domestic upheaval. The interplay between personal experience and “the event” is something I have been exploring in my work. From East London’s Balfron Tower, where tenants were forced to leave to accommodate a wealthier class’s arrival, to the democratic Christchurch earthquakes and my current project on the Horse River wildfire. With this latter project, however, a greater event of potential epic displacement and catastrophe are brought into the frame.

With this work, the question which hovers over all the images is, where will we go, as a species, when we can no longer inhabit the lands we have since our beginnings. This is the key question when we consider climate change and it is a question which ignores all boundaries, borders and human-created divisions.