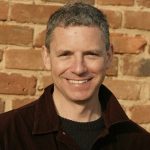 A poet whose collections ‘The Farewell Glacier’ and ‘Out of Range’ explore the Arctic and climate change through human/non-human voices, and the impact of ‘Generation Anthropocene’.

I have published four collections of poetry with Bloodaxe. The first, The Man in the White Suit, won the Forward/Waterstones Prize for Best First Collection. The Farewell Glacier (2012) is a book-length poem in many voices, both human and non-human, about the Arctic, climate change, and my attempts to grapple with both. It was inspired by a Cape Farewell voyage around Svalbard. The poems were recorded for United Visual Artists’ High Arctic installation at the National Maritime Museum. Many of the poems in Out of Range (2018) explores the impact of ‘Generation Anthropocene.’ My poem Message from the Unseen World, about Alan Turing, was commissioned for a permanent public artwork located in Paddington, by UVA.

My other work includes the librettos for Between Worlds (ENO 2015) and Cave (RHO/London Sinfonietta 2018) both for the composer Tansy Davies, and with directors Deborah Warner and Lucy Bailey respectively. Cave is a journey of grief and courage into an underworld of spirits. My play All the Angels (Faber) was produced at the Globe in 2017, and To Reach the Clouds, adapted for the stage from Philippe Petit’s book about his Twin Towers high wire walk, was produced at Nottingham Playhouse (2010). I also write screenplays, including Romulus My Father (starring Eric Bana).

I am currently working with the photographer Tim Mitchell on a commission from the Open University / Stories of Change, about power stations, and the future of energy generation.

A Personal History of the Anthropocene – Three Objects #9

16th November 2018
Poet Nick Drake offers poems of three dark objects that illuminate our world-shifting ways: an emblem of inefficiency, a single-use convenience that will outlast us, and a nightmare taking shape beneath our feet, our streets, our notice, until... Read More
Website
Nick Drake