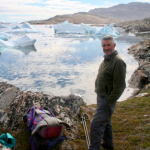 A writer exploring the world through short stories, novels, poetry and non-fiction, who sees climate change as potentially existential for fellow travellers on planet Earth.

I left school at 16 to join the Royal Navy as an Artificer Apprentice. After marrying thirteen years later, I left the RN to follow an engineering career in industry. Nearing retirement, I took a degree with the Open University, studying Geology and Creative Writing for six years, graduating at the age of 68. Part of the course included modules on climate change so I have some idea of the processes involved.

I enjoy exploring the world and its people through fiction; short stories, novels and poetry. I have written non-fiction, drawing on the geology I learned at the OU and what I see in my local area. I have also written a travel memoir following a trekking trip to Nepal. More will follow about my trips to Kilimanjaro, Iceland and Greenland.

I have been published online at Word Bohemia, through my local bookshop and won a national writing competition in 2014, run by Pan Macmillan. I have self-published six books on Amazon, with more to follow.

I especially enjoy the short story form — some of which involve climate change dystopias. I see climate change as potentially existential for the human race and many of our fellow travellers on planet Earth.

Three of us writers have been running a blog for nearly three years now. This covers any subject but tends to concentrate on writing. We welcome contributing writers.