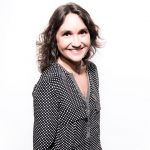 is a ClimateCultures Author
Other
Tags:
arts leader, theatre producer

A Creative Climate Leader, and Executive Producer at London’s Royal Court, Chair of London Theatre Consortium and Chair of Trustees for Clod Ensemble

Lucy has been Executive Producer at London’s Royal Court since 2013, and is Chair of London Theatre Consortium and Chair of Trustees for Clod Ensemble.

Lucy has a BA in Drama from Exeter University, MA in Philosophy from UCL, and is a Fellow of RSA. She lives in Lewes, Sussex.