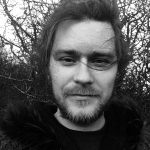 A freelance film and performance maker using documentary to bear witness to the unique stories of people and places, identity and landscape

Jon is a freelance film and performance maker based in Cumbria. His practice involves primarily using documentary as a medium through which to bear witness to the unique stories of people and places, identity and landscape. He is currently working with Sarah Thomas on Óshlið: River Mouth Slope, a film reflecting the stories of an abandoned coastal road in Iceland. Jon has also collaborated on performances for events by The Dark Mountain Project. Recent projects include facilitating renga (collaboratively composed poetry) for Outrider Anthems’ Festival of the Dark and directing After the Floods at the Dukes Theatre, an immersive performance installation exploring the experiences of Lancaster’s homeless community during Storm Desmond in December 2015.

25th May 2017
Filmmakers Sarah Thomas and Jon Randall share a conversation about the ideas, stories and creative processes behind their film exploring Óshlið, an abandoned road in Iceland -- accompanied by a slideshow of their images from this changing place. Read More
Website:
Jon Randall
Website:
River Mouth \\ Slope
Twitter:
@jonnyrandall
Vimeo / YouTube:
http://www.vimeo.com/jonrandall