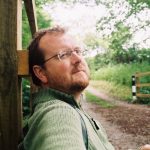 A writer and filmmaker linking art forms to dialogue around climate issues, whose practice stretches back to theatre-making.

“I’m a writer and filmmaker, although my practice stretches back to theatre-making in the 1980s. Recent work has been in the areas of art & neuroscience (filmmaker in residence within the Cambridge University/NHS Dementia Research Network), applied anthropology in Mongolia and with the Bedouin of the Negev Desert, Israel, and the lives of poets, including a film about John Clare, and a new project exploring the mystic visions of William Blake.

My interest in linking art forms to dialogue around climate issues was catalysed by the TippingPoint Warwick conference in 2016, and subsequently I produced a weekend Festival of Change, here in Cambridge, with the NGO Pivotal (short film available on my Vimeo page).”

A Year of Wonders Under a Circling Sky

16th April 2021
Writer and filmmaker James Murray-White reviews Neil Ansell's new book. The Circling Sky, an account of a year-long immersion in England's New Forest, is both a guidebook to close observation and a reflective elegy to place and belonging. Read More

All the Little Gods Surrounding Us

13th July 2020
James Murray-White discovers in 'Winged', a new collection of words and images from fellow member James Roberts, a creative expression of the natural world's ‘being-ness’ and a way for us to deepen our own presence within the more-than-human. Read More

Towards an Erotics of Place

‘Creations of the Mind’

24th April 2019
Filmmaker James Murray-White reviews A Film-Philosophy of Ecology and Enlightenment. In this scholarly work, Rupert Read advocates an ecological approach to film-philosophy analysis, arguing that film can re-shape the viewer’s relationship to the environment and other living beings. Read More

“Attending to the world’s extraordinary surprise”

18th February 2019
Filmmaker James Murray-White reviews Robert Bringhurst and Jan Zwicky's Learning to Die: Wisdom in the age of climate crisis -- a book urging the cultivation of human virtues in a time of crisis and the rejection of lazy thinking. 700 Read More

“Firestone far beneath our feet”

8th January 2019
James Murray-White took a break from editing his Finding Blake film to review Cornerstones: subterranean writings. This new collection explores how all landscapes — from Dartmoor to the Arctic Circle — begin below the surface of the earth. Read More

11th September 2018
Filmmaker James Murray-White reviews a recent event with GroundWork Gallery and the British Ecological Society: a gathering of poets, academics, and ecological minds exploring our responses to environmental crisis through a day of ecopoetics, provocations and wild conversations. Read More

By Understanding COP23, We Can Help COP24 Succeed

8th December 2017
In a three-way discussion, James Murray-White, Lola Perrin and Paul Allen explore Paul's experiences at the COP23 climate talks in Bonn. Their video interview is a valuable insight for those of us who couldn't be there in person. Read More

Of Fire, Ice and Earth

10th November 2017
Filmmaker James Murray-White reviews Fire & Ice, an exhibition bringing together three artists who complement each others' practice in a way that points the audience 'to deeper connections with the base elements that underpin planetary life and consciousness'. Read More

“Water’s Rising, at Their Ankles Now…”

10th October 2017
Filmmaker James Murray-White returns, fresh from a trip to Hull, City of Culture 2017, to bring us his review of the remarkable and immersive performance of 'FLOOD', a production that's "exploring our humanity and responses to the world". Read More

Necessity and Urgency — Summer of Learning

We’ve launched our Creative Showcase of new or recent work from our member artists, curators & researchers: poetry/prose collections melt and the hispering, comic books Pole to Pole & The Wizard of O2, non-fiction books Carbon Choices, Living with Trees & Fifty Words for Snow, independent zine Imminent, an online Essential Ecoliteracy course, The Long Return: an essay on belonging, and novels The Wintermen III and SkySeed. Check out the full collection.