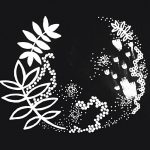 An artist whose drawings and mixed-media textiles illustrate the visibility and invisibility of air pollution and toxic particles we can’t see but are still very present.

Ellie’s series of work illustrates the visibility and invisibility of air pollution and the toxic particles the public unknowingly breathe in. While the air appears clear in the UK in comparison to the images of the smog-filled cities of China, we are still exposed to harmful levels of pollution. Through ink drawings and mixed-media textiles pieces, her work shows a visual representation of things that we can’t see but are still very present. The series’ title, Kuuki, draws attention to the public’s unawareness of the serious issue of pollution and its effects on both a local and global scale; the irony of the air and the atmosphere, which keeps us alive, also killing us. The intricately drawn and sewn pieces aim to draw attention to details; seeing the unseen. The contrast between the white on black pieces working in cohesion with the black on black, letting the viewer ponder over the importance of what is visible and, physically, almost invisible. Like a riddle, her work is about the uncomfortable balance of air pollution; what cannot be seen by eye in the present moment, but will be starkly visible in the future.