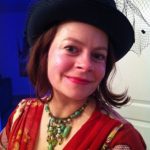 A poet, short story writer and performer, and a fledgling singer-songwriter whose first song is an offshoot from her poetry commission from Weatherfronts 2016.

Justina is an award-winning poet, short story writer and performer, who’s currently finishing her first novel, which is about oystering. She writes in diverse styles and genres, and has written everything from an art book about angels, to a play about centenarians in conjunction with the Royal Court. She had a previous career as a freelance journalist and commissioning editor at national newspapers and magazines, including the Guardian and The Daily Express. Justina lives and writes in Staffordshire on board an electric, solar-powered narrowboat which dates from 1850 and – pulled by a horse – used to take coal from the Black Country to London. In her spare time she’s a fledgling singer-songwriter. She’s just recorded her first song – an offshoot from her commission from Weatherfronts 2016.

24th November 2017
Writer Justina Hart concludes her account of writing Doggerland Rising, researching the prehistory of the mesolithic peoples of these lowland plains before sea level rise created the North Sea, and reveals what she has learned from the process. Read More

15th August 2017
Writer Justina Hart introduces her poem (commissioned following a Weatherfronts climate change conference) about prehistoric events that drowned Doggerland and made Britain an island, and how her research with the help of palaeo-scientists fed into the creative process. Read More
Website:
Justina Hart