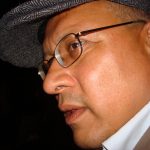 A poet, playwright, essayist, broadcaster and novelist whose latest climate change work is the near-future live performance for radio re-broadcast [sic] of ‘Ireland has struck oil!‘

Gabriel Gbadamosi is an Irish Nigerian poet, playwright, essayist, broadcaster, novelist and Londoner. His field research in European and African writing for performance as a Wingate Scholar and AHRC Creative Fellow at the Pinter Centre, Goldsmiths, disclosed a common thread… ‘We no longer understand the weather’. His latest reflection on climate change, as part of The Fence network of European playwrights at King’s College, London (19 Oct. 2017), is the near-future live performance for radio re-broadcast [sic] of ‘Ireland has struck oil!‘