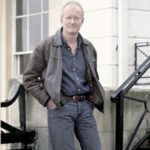 A freelance writer, oral historian and community engagement worker now very much focused on writing about climate change in an accessible way, through comedy and documentary.

“I’m a freelance writer, oral historian and community engagement worker. As a writer I’ve had over 60 scripts performed on stage, radio and television. I’ve also written two books on scriptwriting (Writing Dialogue for Scripts is now in its 4th edition). My latest stage play, The Sword of Alex, about nationalism and belonging, is to be performed in 2018. An an oral historian I direct projects, act as a consultant and also deliver training courses for the British Library and the Oral History Society all over this country and abroad. As a community engagement worker I have run many projects, including a 3-year multi-stranded programme for the Paul Hamlyn Foundation at The Lightbox in Surrey.  Initially inspired by a talk by Paul Allen, I am now very much focused upon writing about climate change in an accessible way. At present I have a comedy about the politics of climate change under consideration at BBC tv, am pitching a tv adaptation of Saci Lloyd’s The Carbon Diaries, have just completed another climate change tv comedy script and am working with a producer on a radio documentary series about the public silence surrounding climate change.”