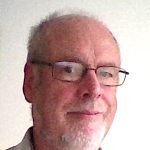 I am a retired art teacher and live in the north east of England. I write, mainly poetry at the moment, and also produce artworks, mainly paintings. I have been awarded First Prize in two poetry competitions during the last two years. One prize was for the 2020 Opossum Poetry Competition which had the theme of ‘music.’ Other poems are published in Dark Mountain, The Projectionist’s Playground and in many online magazines.

I am a keen birder and generally interested in wildlife and the countryside. I was involved with the re-introduction of red kites to the north east of England. Hence, I am acutely aware of the climate catastrophe — one poem with this theme is in Dark Mountain, Issue 17. The poem is titled, ‘No Longer’ and is about species extinction.

As a Buddhist, I also recognise how my practice influences my work, both in visual art and poetry. This has become a little more explicit in recent poems where I use some Buddhist terminology.

During the first lockdown I found my inherent creativity came to the fore. I painted a series of paintings of birds threatened with extinction and related some of the work to climate change.

I also wrote an article for a local cooperative newspaper about Covid and creativity.