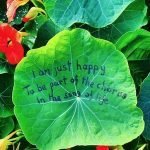 A retired drama teacher and writer of short stories, plays and haiku on nature — and ‘rebel haiku’ on post-it notes left in significant sites, usually supermarkets.

I’m a retired teacher of Drama and sometimes used my position to involve young people in environmental themes.

I was born and brought up by the sea in a Donegal fishing community and I now live in the north-east of England… in a fishing community. In between those coasts, I’ve lived in Manchester, London, York and [mainly] Selby.

A long time ago, I spent a year in Brittany and once caught a bus to India from Totteridge tube station in London. I’ve written articles for the NAEE blog and ZigZag Education has published some of my lesson plans and plays. I also write/create haiku with a view to reminding readers of the nature which supports and enriches us. I’m currently a writer with XR Wordsmiths.

What I like about haiku is that you can say one in a single breath and we all have to breathe. I’m also an admirer of the artist Andy Goldsworthy whose works reflect that we’re never standing on solid ground but in circumstances that are constantly changing — by the time you finish reading this, you will not be exactly the same person who began to read it. Some of your cells will have died, some will have been born. And you’ll have read this arrangement of words for the first time.

For a few years I tried to merge the approach of Andy Goldsworthy to the creation of a haiku. I wrote the first on a fallen leaf, took a photo and left it in the woods. It said:

“I lie at your feet.
Once I danced above your head.
How short the summer!”

I liked writing on driftwood and this one sums up all of you reading it:

“Different currents
have carried us to this shore.
What storms! What stillness!”

Sometimes I’d ‘arrange’ them – I’ve placed holly berries, pennies, birdseed and barnacles among some materials. They’re often not really in the spirit of traditional haiku — I just use what passes for the traditional form. For a laugh, I translated famous films into that form – some were collected and published by the Iron Press in a book called The Reel Thing. The challenge was to guess the film from the haiku. Here’s one:

A year or two back, I used the form to write ‘rebel haiku’ on post-it notes which I’d leave in significant sites, usually supermarkets. All the visual haiku are on Instagram where I’m haikumick.

I like writing, I suppose. As a teacher of Drama, I never quite had the confidence to put on plays that other people had written or maybe it was that it might be too difficult to shoehorn the adolescents I taught into characters that were not written for children. It must have seemed odd to some that the school where I worked had a Drama teacher who never put on plays. So, eventually, I began to write, sometimes creating characters based around the students whom I knew would play the part. I didn’t do auditions — secondary education already had enough opportunities for students to be told that they weren’t good enough. Sometimes, I wrote to bring tears, sometimes laughter, sometimes even to shock a little.

I’ve written short stories for young and old – some published, most not. I wanted, for example, to translate Greek Myth dilemmas into ones that young children might understand, so, based on King Midas, I wrote The Chocolate Fingers. I’ve written a series for adults set in the future when sea levels have risen and people can grow rice in the Yorkshire Dales, Almost none have been published, a tribute to either the wisdom of publishers or to their failure to recognise a Nobel Prize candidate.

Now, writing for XR Wordsmiths, it’s all a bit more serious. I have four grown children from a marriage and beyond and, if any of them reach my age — near 75 — I shudder to think what their world will be like. Thus I write a lot of letters, hoping to sway authorities in a direction that will make the world safer for their later years.

Solarpunk — Storytelling for Futures We Want to Create

11th May 2022
Writer Mick Haining returns with tales from the Solarpunk storytelling showcase that was launched by XR Wordsmiths with the aim of imagining futures we want and need to create, and which has given both writers and readers hope.
Read More

6th August 2021
Writer Mick Haining discusses the role of stories in helping to bring about change to mobilise, not paralyse, the XR Wordsmiths group that he's part of, and their call out for new Solarpunk stories that give us hope.
Read More
Instagram
haikumick