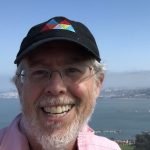 An editor and writer whose flash fiction shows the immediate impacts of climate change, to influence how people perceive it and their place in the world.

I am an editor by day, with a newly discovered passion for writing flash fiction by night. I’ve worked at newspapers and in the corporate world for more than 30 years, and was a forestry worker for a decade before that. Recently, I’ve tried to gear some of my writing to influence how people perceive climate change.

My climate-related writing started not long ago with a nonfiction piece for the Dark Mountain Project, written after moving to California following several years living in the UK. Dark Mountain also published my first fiction, which appears in their fall 2020 anthology, Fabula. That short piece connected me to the world of flash fiction.

In my current climate flash writing, I generally stay away from speculative/dystopian themes, instead attempting to create stories that show the more immediate impacts of what is happening. I have a particular interest in wildfire, both as a California resident and as a former wildland firefighter. Increased incidence of wildfire is certainly one of the devastating outcomes from climate change, and will only get worse for the foreseeable future.

I believe that art, broadly defined, plays an important role in shaping how people respond to matters large and small that affect us all. Flash fiction is a growth area in fiction writing at the moment, and is well-suited to tackle issues around climate change. In the span of two to five minutes, well-written flash can bring out an emotional response in readers, hopefully causing them to pause and think about their place in the world.