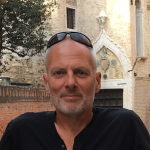 An expedition guide who has worked in conservation, experienced biodiversity loss and climate change through travel and reaches people through writing, with his eco-fiction novel, Stonechild.

After 25 years in the UK police, working in firearms and as a hostage negotiator, I had a complete change and retrained as a mountain and expedition guide. This work took me to a variety of countries working primarily on youth development. This involved using month-long expeditions as the medium to teach leadership, team working and an awareness of conservation.

I stumbled into two important conservation projects as expedition leader and project manager. Both were in Borneo. The first was a three-month long expedition working on behalf of the Royal Society in Danum Valley planting hardwood trees. This was a biodiversity project to work out how best they grow and how best they might attract biodiversity. We planted 22,000 trees.

By the hand of fortune, I moved straight onto another three months in the jungle, this time in Maliau Basin. This was on a mapping project in an area that was only discovered in 1947 and has only seen a handful of expeditions to its centre. We mapped 7.5 km to the seven-tier waterfall, Maliau Falls. On route we discussed a new species of plant and a new waterfall.

Prior to Covid-19, I have guided across the globe for 18 years. There is an opportunity when spending long periods of time with clients to talk, discuss and perhaps enlighten on conservation issues especially climate change and loss of biodiversity, the likely effects and the need to act. In 2011, I won the Bronze in the Wanderlust Magazine World guide Awards for my work, which was presented by Bill Bryson at the Royal Geographical Society, London.

As a police officer and as a guide, I have written for magazines and websites. With the arrival of Covid-19, I decided to try and reach people through my writing, being unable to work in the field. I published an eco-fiction novel, Stonechild, where the famous statues of London come to life with their urgent message on conservation. Understanding that we won’t listen, the battle for London begins.