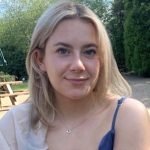 An arts researcher focusing on climate communication within the Anthropocene and its relationship with art, and drawing attention to those suffering disproportionately from climate change impacts.

For the past five years I have tailored my academic research to hone in on art and its cultural context — with a recent focus on climate communication within the Anthropocene, and how it can impact art and vice versa.

Predominantly, my work draws attention to those suffering disproportionately at the hands of climate change. Exploring academic ideas that extend the Anthropocene, such as James Moore’s ‘Capitalocene’ and Kathryn Yusoff’s ‘Black Anthropocene,’ my explorations view social, racial and environmental justice as inextricably linked. With a perspective that seeks to express silenced narratives, my research has explored photographs of droughts in Kenya, the Flint Water Crisis, and mining implications on land affecting Indigenous Australian communities.

I am currently studying a postgraduate degree in Contemporary Art Theory, where all of my research has brought attention to injustice caused and exposed by environmental degradation. Largely, I find interesting the relationship that audiences have to the art they view. Whether this be due to a lack of interest, a triggering of action, or perhaps somewhere in between: visual culture holds a communicative ability that surpasses that of writing and talking alone.

I strongly believe that the exploration of art, whether academically or informally, can advance movements pushing for equity; and within the context of the climate crisis, such advancements are needed more than ever.