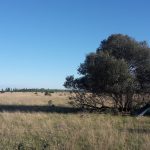 Writer Nick Hunt walked the invisible pathways of Europe’s named winds for Where the Wild Winds Are. His final extract tracks France’s Mistral (‘masterly’, from the Latin magistralis), the ‘idiot wind’ that inspired and tormented Vincent Van Gogh.

‘There is a town north-west of here called Aubenas, deeper in Ardèche. The old people say that until fifteen years ago, they had never known Mistral. Now it blows there frequently, very strong, only in the last two decades. No one knows why.’

This was not the first time I’d heard of winds changing their patterns – in Croatia people had argued incessantly over whether the Bora was stronger or weaker than before – but it was a topic I had mostly steered clear of. The dizzying complexity of meteorological science had been impressed on me early on, and statements like ‘the winds are changing’ are impossible to back up without meticulous data and computer modelling. Anecdotal evidence is equally dodgy territory, because people’s memories of what the wind was like fifty years ago, or twenty, or two, relies on their subjective state, which can change as dramatically as the winds they are trying to remember. As every poet knows, the boundary between weather and mood is infinitely porous.

However, it seems clear enough that if Europe’s climate is changing, the time-worn pathways of its winds eventually will too. If the climate changes the temperature changes, which means the atmospheric pressure changes; if the atmospheric pressure changes air will be forced along different routes, adapting to environmental shifts as species do. In fifty or a hundred years perhaps the Mistral will have migrated to the east or west, rendering those blank north-facing walls obsolete technology. Perhaps the Helm will be displaced from its redoubt on Cross Fell – the demons finally exorcised for good – and the Bora, Foehn, Tramontana and Bise channelled into different territories, like climate refugees.

Viviers, it turned out, was a fitting place for such thoughts: a local legend warns of the perils of the winds changing their patterns. According to this origin myth the Mistral rises not far from here, in an area of marsh, pouring through the open mouth of an enormous cave. After years of suffering, the people living in its path devised a method of stifling it; they constructed a great wooden door, reinforced with iron bands, and nailed it swiftly into place to take the wind by surprise. The Masterly howled its discontent, cursing and threatening, but was trapped inside the rock with no hope of escape.

That winter was the mildest the Rhône Valley had ever known, untroubled by frost or snow, and the people were glad of what they’d done. When summer came, however, everything started to go wrong. The air was humid and unhealthy, causing sickness and disease. With no wind to dry the fields the grass grew lank, the ground became boggy and the crops developed mould; the countryside sweltered, and was plagued by insects. Unable to bear these conditions any longer the people decided to free the wind, nominating the nearest village to prise open the door. Before they did so, the locals made the Mistral promise to behave more gently, to stop flattening their crops and tearing down their barns. The Mistral kept its word, but – like any deal with the devil –- acted to the letter rather than the spirit of the pact, sparing the immediate environs but not the countryside beyond; once released it howled to the south, frustrated from its captivity, and raged with a violence even greater than before. The moral of this environmental fable is very clear: don’t mess with forces you don’t understand. The cold north wind, for all its discomfort, brings blessings to the land.

Nick introduced this five-part series with an extract of the book’s opening essay, following this with his account of walking with England’s wild wind, the Helm. In the third part he shared his experience of the Bora, walking the Adriatic coast from north-east Italy through Slovenia and Croatia, and in part four he went in pursuit of Switzerland’s ‘snow-eating’ Foehn.