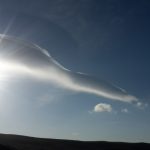 Writer Nick Hunt walked the invisible pathways of Europe’s named winds for Where the Wild Winds Are. Here, he’s on the trail of the Helm, which blows from desolate Cross Fell to wreak havoc in the Eden Valley.

The view resembled a different country to the one I’d seen the morning before. There was no sodden cloud, no murk; the land was bright and loud again, the weather vane of the topmost pines twitching to the west. I made coffee in a pan, cowboy style — a mouthful of grits and a mule-kick to the heart — and as I was thinking of going out, the door banged open.

It was a cheerful pink woman who had hiked up from Kirkland. ‘You can hear the Helm up there,’ she announced breathlessly. ‘It’s horrible, howling and moaning and groaning. I was too scared to go up.’ I was already pulling on my boots, fumbling with the laces. ‘You know why it’s called Cross Fell?’ she continued, taking out her sandwiches. ‘It used to be called Fiends Fell. People thought that demons lived there, so they sent a holy man to bless it. He exorcised the evil spirits, built a cross to drive them away. But I don’t think it worked. It still sounds like it’s cursed.’ I was halfway through the door. I didn’t want to miss them.

It certainly looked like the home of fiends, despite the bright sunshine. Dramatic events were occurring above, in the fathomless workings of the clouds; it seemed that opposing weather systems were engaged in epic warfare. To the north and west a ragged mass scoured the lower slopes of the fell – Grey Scar, Black Doors, Man at Edge, said the place-names on my map — hazing the air with a smudge of rain, leaving shreds of itself behind. Autonomous mists of water vapour travelled in long vertical trails high above the Eden Valley, and grandiose crepuscular rays poured down on the mountains of the Northern Lakes, where Ullswater distantly shone as bright as a mirror. The Helm Bar was not in place, but developments were moving so rapidly it seemed that anything might happen. Scattering Swaledale ewes I hurried on the Pennine Way, up the long, deceptive rise that led towards the summit.

Who was this mysterious holy man? I wondered as I climbed. Unsurprisingly, research suggests that no one really knows; some say a bishop, some say a saint, some say a wandering monk. A local clergyman, the Reverend Robinson of Ousby, wrote in 1709 of the

evil Spirits which are said in former Times to have haunted the Top of this Mountain; and continued their Haunts and Nocturnal Vagaries upon it, until St. Austin, as is said, erected a Cross and built an Altar upon it, whereon he offered the Holy Eucharist, by which he countercharm’d those Hellish Fiends, and broke their Haunts. Since that time it has had the Name of Cross-Fell, and to this day there is a heap of stones which goes by the name of the Altar upon Cross-Fell.

What had the woman from Kirkland meant, talking about howling and moaning? Alone in that empty place I soon found out. Something must have shifted in the air, for the aural landscape suddenly changed: above the buffeting blows of gusts that banged recurrently on my ears, flatlining like microphone distortion, rose an unearthly whispering like dozens of tiny voices. It was a mischievous chattering accompanied by a hissing that suggested branches and spirals, complex patterns being woven in the air, and under it all a low moan, like an animal in distress.

Nick introduced this five-part series with an extract of the book’s opening essay, and in the third part he shares his experience of the Bora, walking the Adriatic coast from north-east Italy through Slovenia and Croatia.