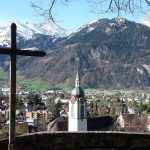 Writer Nick Hunt walked the invisible pathways of Europe’s named winds for Where the Wild Winds Are. Here he pursues Switzerland’s ‘snow-eating’ Foehn, which brings clear skies and wildfires — as well as insomnia, nosebleeds, anxiety and depression.

Stepping outside was like being plunged into a warm, stormy sea. Channelled, diverted and rebuffed by the complexities of the slopes, the Foehn’s southerly flow was confused, broken into conflicting currents that rushed nervously against one another, so that one moment I was standing still and the next propelled alarmingly forward at speeds I could hardly control. The cable car was grounded, its gantry and trembling wires caught in one unending scream; the only alternative route was the three-hour trail down the mountain. The forest was a static roar, and the pines bent like rubber with the impact of each gust. When the world emerged below, it looked as if layers had been removed to reveal it for the first time.

The surrounding mountains had jumped closer, dabbed with Tippex-white snow, each crease and ripple illuminated to a hyperreal degree. The rooftops of Altdorf were so defined it was like looking through a telescope: every chimney, turret and tile had been tuned to perfect focus, giving everything an oddly computer-generated quality. Descending to the windswept town was like turning a dial and zooming in, the picture growing more precise with each step.

Loud with sunshine, bright with wind, Altdorf was a different town from the rain-streaked place I had left. The temperature had leapt ten degrees and warm air coursed the streets, flapping the shirtsleeves of gossiping elders, hurling the water from orderly fountains and driving tornadoes of leaves through the lanes. The keys, crowns and pretzels of ironwork shop-signs swung madly over doorways, and woodcock feathers vibrated in the brims of Alpine hats.

There was only one direction: blossom, leaves, litter, dust and plastic bags all chased north, and the clothes on washing lines had turned to weather vanes. I followed this flurried migration back to Flüelen and the lake, where the water had turned an unreal blue, flecked with magnesium flares. A steady procession of white horses roared offshore in repetitive ranks, divisions of cavalry on the move; on the quayside an elderly man sat watching the waves, wind-bathing.

The energy overwhelmed my senses, made me drunk with it. With the  Foehn’s encouraging hand at my back I fairly flew along the trail, under the Ober Axen cliffs, through a tunnel in the rock where the air was funnelled so intensely it forced me into a clumsy jog, and soon I was back beside the lakeside chapel at Tellsplatte. Soon after that the black bull of Uri was replaced by a white cross on red: I had entered the canton of Schwyz, which gave Switzerland – Schwyzerland – its flag, and its name.

Nick introduced this five-part series with an extract of the book’s opening essay, following this with his account of walking with England’s wild wind, the Helm and his experience of the Bora, walking the Adriatic coast from north-east Italy through Slovenia and Croatia. In our final extract, Nick shares his experience on the trail of the ‘idiot wind’ – France’s Mistral.